Ghosts can be quite the problem for those not used to dealing with them, especially when they show up throwing ectoplasm and knocking over priceless vases. Luckily, the Ghost Club are here to deal with pesky poltergeists, gruesome ghouls and any other paranormal pests. Twins Angeline and Edgar are Ghost Club’s youngest members, until new recruit Dylan shows up. As the grandson of Ghost Club’s Grandmaster, big things are expected of Dylan, but he’s having a hard time taking up the mantle of ghost-catcher. Even with Edgar and Angeline showing him the ropes, Dylan’s not so sure he’s cut out for this business. Can he overcome his biggest fear?

Any young readers who might feel the same way about ghosts as Dylan needn’t be afraid to pick up Ghost Club – this book is definitely more funny than scary! An immensely enjoyable adventure for readers eight and up that won’t give them nightmares.

Holly Harper is a children’s bookseller at Readings Carlton where she organises the kids and Young Adult enewsletters. She also writes books for younger readers under the name H.J. Harper. Find out more about her Star League series and other books here and follow her on twitter - @hj_harper. 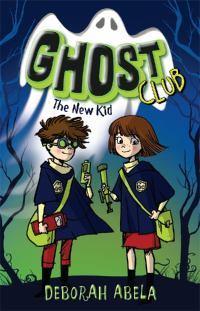