Forty Nights opens with its central character, lawyer Tishtar, shopping for food in Sunshine near his office, remembering his childhood in Iran, and recalling how he learnt the traditions and stories of his homeland from his beloved Maman. It’s a well-set scene that places the character firmly in the bustling Melbourne suburb, yet reveals that Tishtar’s mind is wandering to other times and places. This idea of placement and displacement, and of living in the past and present simultaneously, extends throughout this novel, as debut author Pirooz Jafari takes readers from Melbourne and Geelong, Sydney and Wollongong, all the way to Tehran and Gotland, and from the present day right back to the 1300s.

At the heart of the novel is Tishtar’s current case: he is working to secure migration papers and visas for a client whose nieces are living dangerously and without proper supervision in Somalia. The desperation to secure safe passage to Australia and avoid the refugee camps, amidst Australia’s opaque legal requirements and long wait times to hear of any progress, grows apace. Alongside this contemporary story, we learn of Tishtar’s adolescence and young adulthood in his hometown of Tehran during the late 1970s and early 1980s, as a new and oppressive regime takes over from the progressive Iran that had flourished in the decades before. A mysterious character, Gretel, appears in both time periods, as well as a concurrent story set in the 1300s. It’s an ambitious sweep, but the themes that underpin this novel – the idea of home, the human right to cultural and physical safety and the right to seek refuge, the importance of family, the workings of memory, the act of storytelling as identity – are strong enough to tether the narrative, and bring the reader along on the author’s journey.

Forty Nights is a gently told story, sometimes describing great violence and injustices with a warmth and calm that belies its substance. This writerly approach teaches readers in turn about the generosity required to share stories of trauma.

Alison Huber is the head buyer at Readings. 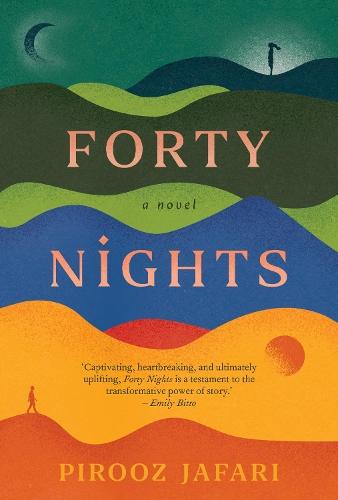