Force of Nature by Jane Harper

Jane Harper’s The Dry was the book of 2016. An Australian debut that grabbed everyone’s attention, it won awards, hit the top of bestseller lists, and captured a Hollywood movie deal in the process. Following up such enormous success isn’t easy. Reading Harper’s second book, Force of Nature, brings with it a sense of trepidation: can she recapture the magic and do it again? As it turns out, yes she can.

Force of Nature sees the return of Federal Agent Aaron Falk. This time, he’s drawn into a case that’s less personal than what he was facing in The Dry, but every bit as interesting and layered. Five women walk into the bush on a three-day hike as part of a corporate team-building exercise, and only four return. The woman who has mysteriously disappeared is an informant that Falk has been working with, and he’s the last person she tried to call before she disappeared.

The structure of Force of Nature moves back and forth between Falk’s present-day investigation, and the story of the hike told from the point of view of the women taking part. Allowing the reader to see things through the eyes of the women gives necessary insight to a range of complicated characters, and works to build the tension as things go increasingly wrong for the group in the wilderness.

A gripping mystery full of juicy secrets, Force of Nature is the kind of book you’ll want to read in one sitting. Fans of The Dry won’t be disappointed. 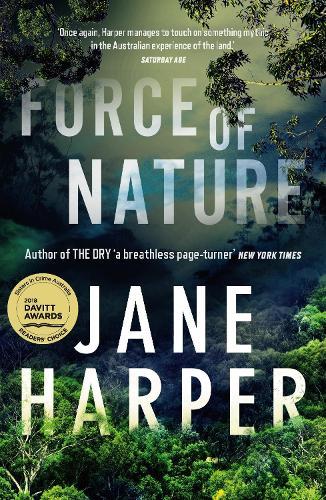