Attack of the 50 Foot Wallflower by Christian McKay Heidicker

Phoebe’s mum is the world-famous Loretta Lane – the woman with whom King Kong (who was actually a ‘giant sweetheart’) was infatuated. Her dad is an invisible giant man in the sky who warns Phoebe and her mum through eye movements of any impending Blob/Vampire/Swamp Thing/Pod People attacks, allowing them to escape in time and move on to the next town. While not what Phoebe would have chosen for herself, this life works – until Loretta goes missing, leaving Phoebe to fight off sleazy police, fellow high-schoolers, secret underground government research lab members, and an evil half-sister by herself.

Attack of a 50 Foot Wallflower is a loving homage to 1950s horror films. The world of the book is black and white (literally – at one point Phoebe is exposed to real life Technicolor and it blows her mind) but that’s the only thing about this story that is. For a fun and silly romp through the world of B-grade horror movies, a lot of heavy topics are dealt with in this book, from America’s treatment of its peoples, to how religion and government should fit in to society. Despite this, the author is never heavy handed and you never feel like you are taken out of the story for a brief lecture on equality or racism. In fact, the only negative thing I have to say about it is that it does not include a ‘recommended watching’ section at the end for all the movies referenced! I had so much fun reading this utter delight of a book and highly recommend it to all kids aged 13+. 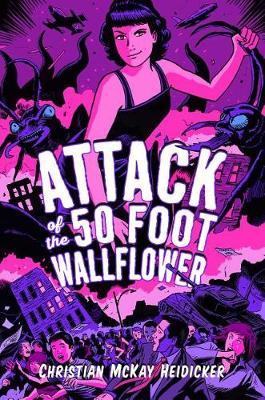 Attack of the 50 Foot Wallflower