Empowering Children: Children’s Rights Education as a Pathway to Citizenship 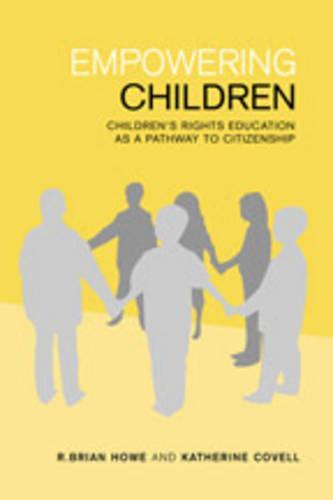 Empowering Children: Children’s Rights Education as a Pathway to Citizenship

Approved by the General Assembly of the United Nations in 1989, the United Nations Convention on the Rights of the Child affirms that children in all countries have fundamental rights, including rights to education. To date, 192 states are signatories to or have in some form ratified the accord. Children are still imperilled in many countries, however, and are often not made aware of their guaranteed rights. In Empowering Children, R. Brian Howe and Katherine Covell assert that educating children about their basic rights is a necessary means not only of fulfilling a country’s legal obligations, but also of advancing education about democratic principles and the practice of citizenship. The authors contend that children’s rights education empowers children as persons and as rights-respecting citizens in democratic societies. Such education has a ‘contagion effect’ that brings about a general social knowledge on human rights and social responsibility. Although there remain obstacles to the implementation of children’s rights in many countries, Howe and Covell argue that reforming schools and enhancing teacher education are absolutely essential to the creation of a new culture of respect toward children as citizens. Their thorough and passionate work marks a significant advance in the field.