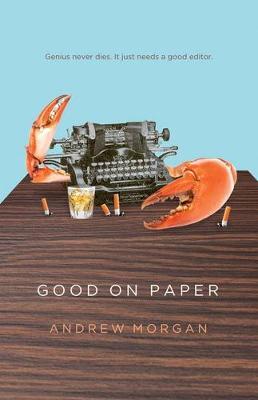 When one-time literary prodigy Josh Henry resurfaces from obscurity, a struggling independent publisher can’t believe his luck. Enter freelance editor Nettie Brown with a simple brief- make contact, get the manuscript, deliver the inevitable masterpiece. But this is no ordinary novel - Nettie is enlisted to help produce a new, improved version of one of the most spectacular failures of the previous decade. Can she negotiate the wounded egos, mangled manuscripts, and missed deadlines before her career succumbs to the final cut? Part mystery, part satire, Good On Paper casts a cool editorial eye over the making of the books we love. ‘A flawless evocation of the literature machine, a witty remodelling of a crime caper, a perfectly formed entertainment.’ Winner - Melbourne Lord Mayor’s Creative Writing Awards

It’s no secret that a great novel is not just the work of a great writer, but of a great editor as well. In Good on Paper, the debut novel from Melbourne writer Andrew Morgan shows us a publishing industry that is a long way from the romanticised world of letters often portrayed in pop culture – a tough, unglamorous and often cruel business where publishers, editors and writers fight just to stay afloat.

When freelance editor Nettie Brown is contracted to resurrect the failed first novel of former literary darling Josh Henry, she expects a straightforward job: ‘all it’ll need is spit and gumption … You know: try to really just fix the split infinitives. Ensure the passive voice is not used. Or sentence fragments.’ But instead she finds herself assuming the role of babysitter, psychologist and sleuth for the brilliant but volatile Josh Henry, whom she suspects isn’t telling her the whole truth about his new work. As Nettie works to turn a mess into a masterpiece, she finds herself risking the reputations and livelihoods of herself and those around her for the chance to produce something great.

It takes guts for a first-time author to write candidly about the publishing process. Allowing the reader behind the scenes draws attention to that which is designed to be invisible – and of course, Good on Paper, like all books, is a product of that same process. To Morgan’s credit, however, this extra awareness doesn’t translate to self-consciousness – his prose is bright, playful and infused with energy, be it the buzz of an excitable indie publisher or the frazzled Nettie grappling with her career, her conscience and the looming spectre of Editor’s Block. Despite an underdone corporate espionage subplot and an ending that feels a tad rushed, Good on Paper makes for a smart and original take on the world of publishing, and a highly enjoyable read.