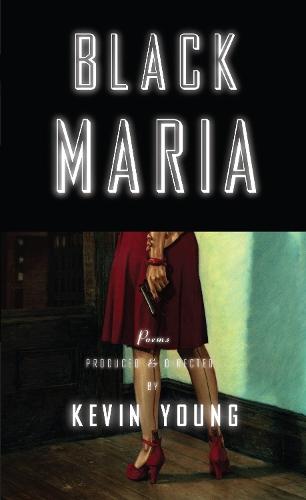 Kevin Young follows his acclaimed exploration of the blues in Jelly Roll with another playful riff on a vital art form, giving us a film noir in verse. Black Maria -the title is a slang term for a police van as well as a hearse-is a twisting tale of suspicion, passion, mystery, and the city. Young channels the world of detective movies, picking up its lingo and dark glamour in five reels of poetry-the adventures of a soft-boiled private eye, known as A.K.A. Jones, and an ingenue turned femme fatale, Delilah Redbone, who’s come to town from down south ( Mama bent till dark / tending rows to send / Me to school … I wanted / To head on & hitch … strike it / Big ). We follow Jones and Delilah through a maze of aliases and ambushes, sex and suspicions, fast talk and hard luck, in Shadowtown where noir characters abound. The Killer, The Gunsel, The Hack, The Director, The Champ, and The Snitch are among the local luminaries and beautiful losers who mingle with Jones and his elusive lady as they stalk one another through the scenes of the poet’s dazzling treatment. Charming, funky, bleak, humorous, picaresque, and full of pathos, Black Maria is brimming with the originality and stark lyricism we have come to expect from this remarkable poet.
When we met her first request:
Got a light?
*
I only had dark
so gave her that instead.
*
Ashtray full of butts
& maybes.
*
The sound of her heels down the hall
to me means reveille.
(from Stills )
Click on the poem titles below to hear Kevin Young read from Black Maria.