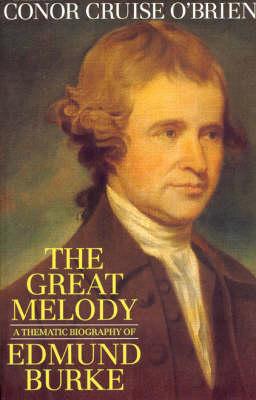 Statesman, political thinker, orator, and ardent campaigner, Edmund Burke was one of the most brilliant figures of the eighteenth century. This unorthodox biography focuses on Burke’s thoughts, responses, and actions to the great events and debates surrounding Britain’s tumultuous relationships with her three colonies–America, Ireland, and India–and archrival France. In bringing Burke to our attention, Mr. O'Brien has brought back a lost treasure. The Great Melody is a brilliant work of narrative sweep and analytical depth. Conor Cruise O'Brien on Edmund Burke is a literary gift to political thought.–John Patrick Diggins, New York Times Book Review Serious readers of history are in for a treat: a book by the greatest living Irishman on the greatest Irishman who ever lived… . O'Brien’s study is not merely a reconstruction of a fascinating man and period. It is also a tract for the times… . I cannot remember another time when I finished a book of more than 600 pages wishing it were longer.–Paul Johnson, The Independent The Great Melody combines superb biography and fascinating history with a profound understanding of political philosophy.–Former President Richard Nixon