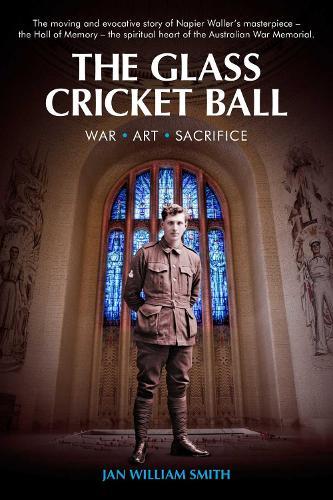 The moving and evocative story of Napier Waller’s masterpiece - the Hall of Memory - the spiritual heart of the Australian War Memorial. The one-armed Melbourne artist Napier Waller OBE CMG created the great Hall of Memory at the Australian War Memorial in Canberra. Waller died in 1972 without knowing that 20 years later his greatest work would be the place for a tomb that would be central to Australia’s remembrance of war dead. The Glass Cricket Ball is a story of Waller’s life, the creation of a great artwork and the bringing home and re-burial of the remains of an Unknown Australian Soldier from a French World War I battleground cemetery. Napier Waller was a casualty at the battle of Bullecourt. A watercolour artist on the Western Front should be out of his comfort zone when his wounds include the loss of his right painting arm. But Napier Waller’s answer was to become Australia’s greatest monumental artist - with his left hand. Waller and the war historian Charles Bean had a fine time deciding which words described the quintessential qualities of Australian fighting men and women in World War I. The words would be included at the foot of each of the fifteen windows of the Hall of Memory and would define fighting, social and personal qualities. The window defined as ancestry would include a sporting image and Waller chose to include a stained-glass cricket ball and stumps - a tradition of the Anzacs of World War I.