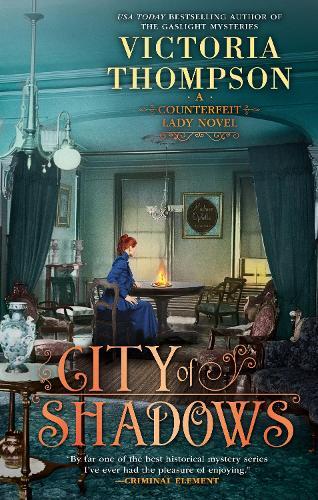 In this all-new Counterfeit Lady Novel from USA Today bestselling author Victoria Thompson, newlywed Elizabeth Miles must use her unlawful skills to expose a dangerous charlatan. Elizabeth Miles Bates has returned from her honeymoon with Gideon and is taking great pride in having completely forsaken her disreputable past. Then her friend Anna Vanderslice begs her to use her talents to save her widowed mother from an unscrupulous medium. Since the war and the flu epidemic left so many families in mourning, seances have come back into vogue as desperate families long to communicate with their loved ones. Anna’s mother has been attending seances in hopes of connecting with her son, David, who died of influenza. Anna had thought it a heartbreaking but harmless activity, but she’s just learned that Mrs. Vanderslice is paying the medium ever-increasing sums of money in her eagerness to make contact. Since David’s death has already caused Anna and her mother financial hardship, Mrs. Vanderslice’s obsession is in danger of ruining them. Madame Ophelia is working with a group of con artists to fleece as many grieving New Yorkers as possible before moving on to another city. Several of Mrs. Vanderslice’s friends, as well as some of Gideon’s clients, have already been victims. Elizabeth knows that simply exposing the medium as a fraud will not be enough to recoup the stolen money; the only way is to con the medium and her cohorts. But will Elizabeth’s family help her when it means betraying other con artists? Elizabeth recruits Gideon, her aunt Cybil, and her partner, Zelda, to lend a hand. Can Elizabeth and her gang of amateurs fool the professionals? Or will speaking to the dead lead to deadly consequences?