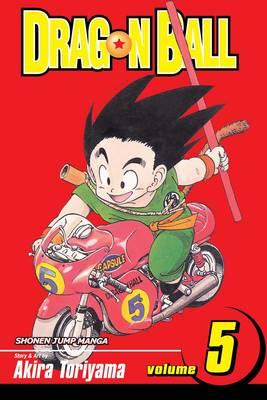 Eath’s greatest hero…is from outerspace! Dragon Ball introduces a young monkey-tailed boy named Goku (a wry update of the classic Chinese Monkey King legend), whose quiet life changes when he meets a girl named Bulma who is on a quest to collect seven Dragon Balls. If she gathers them all, an incredibly powerful dragon will appear and grant her one wish. But the precious orbs are scattered all over the world, and Bulma could use the help of a certain super-strong boy… (In Japan, Dragon Ball and Dragon Ball Z were originally a single 42-volume series. VIZ Media’s Dragon Ball contains vols. 1-16 of the original Japanese Dragon Ball, from the beginning of the series to the climax of Goku’s last fight with Piccolo.) In the final round of the Strongest under the Heavens martial arts competition, it’s down to Goku vs. Jackie Chun, the mysterious old man who’s as powerful as Kame-Sen'nin himself! Will the audience survive the confrontation? After the smoke clears, Goku jumps on his flying cloud and returns to his quest to find the seven Dragon Balls, but now he’s not the only one looking for them. The evil Red Ribbon Army wants the Dragon Balls for themselves, and to stop their plans, Goku must go around the world–and survive the six deadly floors of Colonel White’s fortress, Muscle Tower!