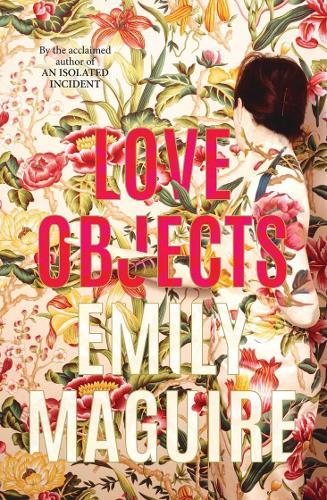 Nic is a forty-five-year-old trivia buff, amateur nail artist and fairy godmother to the neighbourhood’s stray cats. She’s also the owner of a decade’s worth of daily newspapers, enough clothes and shoes to fill Big W three times over and a pen collection which, if laid end-to-end, would probably circle her house twice.
The person she’s closest to in the world is her beloved niece Lena, who she meets for lunch every Sunday. One day Nic fails to show up. When Lena travels to her aunt’s house to see if Nic’s all right, she gets the shock of her life, and sets in train a series of events that will prove cataclysmic for them both.
By the acclaimed author of An Isolated Incident, Love Objects is a clear-eyed, heart-wrenching and deeply compassionate novel about love and family, betrayal and forgiveness, and the things we do to fill our empty spaces.

Nic is smart, proud and quick-witted. She is 45-years old and sees her home as a sanctuary, yet to the outside world it becomes something else entirely. Nic could tell you the story about each ‘special’ thing in her collection, even as those memories lie buried under piles of newspapers, toys, furniture and enough clothes and shoes to fill Big W three times over. Every Sunday she meets her beloved niece Lena – the person she is closest to in the world – for a lunch out. One Sunday Nic doesn’t show up. Lena travels back to Nic’s house which she hasn’t visited since she was a child. She gets the shock of her life – finding her aunty unconscious among what appears to be a lifetime of junk and rubbish.

Emily Maguire’s Love Objects is a character-driven novel, and the three main characters – Nic, Lena and Lena’s older brother Will – are all beautifully formed, with the help of dialogue that is both funny and heartbreakingly sad. This tight focus on character lends psychological insight and empathy to each unfolding scene of upheaval: Nic cannot see that her stuff almost killed her, and this sets in motion events that will prove deeply distressing for all of them.

Maguire spent a year researching the science behind hoarding and its approaches, and her insight enriches the work with startling observations around what types of behaviour are considered safe or unsafe, and why we choose to make something our business. This allows Maguire to layer broader societal questions around possession and intervention, not only with regards to Nic’s behaviour but in Lena and Will’s lives as well: Lena’s private life becomes very public, exposing her to public objectification and abuse, while a past mistake encroaches on Will’s present.

Unapologetic, yet compassionately written, Love Objects is at its core about family, betrayal, forgiveness and love, and what we do to fill the empty spaces.

Carolyn Watson is from Readings Doncaster.