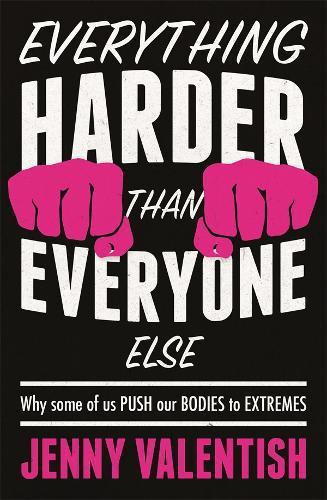 When Jenny Valentish wrote a memoir about addiction in 2017, she noticed that people who treated drug-taking like an Olympic sport would often hurl themselves into a pursuit such as marathon running upon giving up. What stayed constant was the need to push their boundaries.
Everything Harder Than Everyone Else follows people doing the things that most couldn’t, wouldn’t or shouldn’t. Their insights lead Jenny on a compulsive, sometimes reckless journey through psychology, endurance and the power of obsession, revealing what we can learn about the human condition.
There’s the neuroscientist violating his brain to override his disgust response. The athlete using childhood adversity as grist for the mill. The wrestler turning restlessness into curated ultraviolence. The architect who hangs from hooks in her flesh to get out of her head. The performance artist seeking erasure by torturing his body. The BDSM dominant helping people flirt with death to feel more alive. The bare-knuckle boxer whose gnarliest opponent is her ego. The dancer who could not separate her identity from her practice until at death’s door. The bodybuilder exacting order on a life that was once chaotic. And the porn-star-turned-fighter for whom sex and violence are two sides of the same coin.
Darkly funny and vividly penetrating, Everything Harder Than Everyone Else explores our deeper selves and asks: what are your limits?
$32.99Add to basket ›