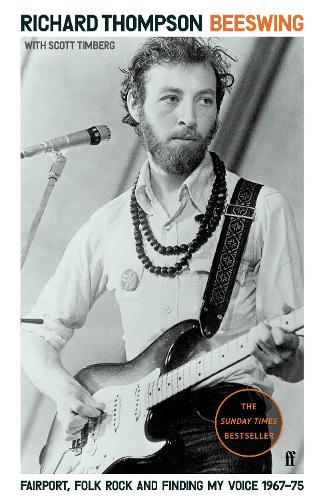 Guitarist and songwriter Richard Thompson came of age during an extraordinary moment in British culture: it was 1967 and popular music was reflecting a great cultural awakening. In the midst of this, eighteen-year-old Thompson co-founded Fairport Convention and helped invent a new genre of music.
Thompson packed more than a lifetime of experiences into his late teens and twenties. From the pivotal years of 1967 to 1975, he matured into a major musician, survived a devasting car crash and departed Fairport Convention for a duo act with his wife, Linda, at the height of the band’s popularity. His discovery and ultimate embrace of Sufism profoundly reshaped his approach to everything in his life and, of course, the music he wrote thereafter.
In Beeswing, Thompson goes back to his childhood, recreates the spirit of the sixties and takes us inside life on the road in the UK and the US, crossing paths - and occasionally sharing the stage - with the likes of Led Zeppelin, Pink Floyd, Nick Drake, Jimi Hendrix and more.
An intimate memoir of musical discovery, personal history and social revelation, Beeswing - like Patti Smith’s Just Kids or Marianne Faithfull’s Faithfull - vividly captures the life of one of Britain’s most significant artists during a heady period of creative intensity, in a world on the cusp of change.

In Beeswing, songwriter and guitarist Richard Thompson gives his account of the amazing period of cultural change in 1960s London and beyond. This period in music has been written about extensively, but Thompson brings something unique to the task, with his considerable storytelling abilities and his insider knowledge of the music industry.

This is a very funny book with loads of stories from the road. Thompson recounts travelling with the fledgling folk rockers Fairport Convention as they traversed England and Europe in a van. There is tragedy here too, with the bus crash that killed the band’s drummer Martin Lamble and Thompson’s girlfriend and fashion designer Jeannie Franklin.

The book is also a fascinating look at one of the most iconic eras in music history. In 1967, you could find yourself in legendary London clubs, The UFO or Middle Earth, watching up-and-coming bands such as Pink Floyd with the likes of John Lennon strolling around. The cast of characters we read about – Sandy Denny, Jimi Hendrix, Led Zeppelin and The Who – is vast. During all this, the always humble Thompson was evolving into a phenomenal guitar player with a very distinctive, non-blues-based technique, becoming a sought-out session player on records by Denny, Nick Drake, and John Martyn. Later on, Thompson converts to Sufism, leaves Fairport Convention and pursues his own voice, culminating in at least two classic and almost ignored 1970s albums (I Want to See the Bright Lights Tonight and Pour Down like Silver). The break-up with wife Linda and the ‘Shoot Out the Lights’ tour of the USA is also acknowledged. Thompson wisely sticks to the most important and fascinating parts of his career, and there are plenty of previously undisclosed facts here, even for longstanding fans. (And yes, he was asked to play guitar for the Eagles!).

A cut above your usual music biography, Beeswing is an essential rock read for anyone wishing to get a deeper understanding of this seminal era of musical history.

Paul Barr is a music specialist at Readings.