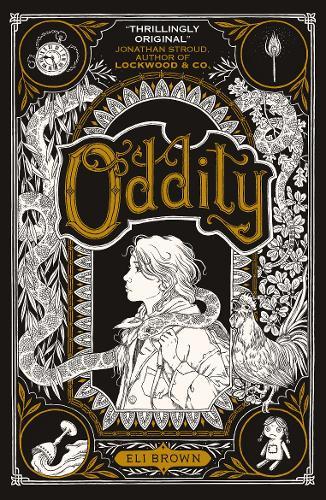 The daughter of a murdered physician vows to protect the magical Oddity he left behind - if only she knew what it was - in an alternate nineteenth century in which the United States is at war with Napoleon’s France.
When her physician father is murdered, thirteen-year-old Clover Elkin embarks on a perilous mission through warring frontier territories to protect the one secret Oddity he left behind. And as she uncovers the truth about her parents and her past, Clover herself emerges as a powerful agent of history.
A rich, startling, funny fantasy adventure, powered by an irresistible force-of-nature heroine; Clover Elkin is a born fighter - a heroine to rival Lyra Belacqua or True Grit’s Mattie Ross.

Eli Brown’s debut novel for younger readers introduces us to an alternate 1800s America, where the Louisiana Purchase has not come to pass, and the Unified States is on the verge of war with Bonaparte’s France and the fictional Sehanna Confederation. Mixed up in all this are the fabled and much-desired Oddities: rare items of wonder and magic that can appear harmless, such as the wineglass that is always full, or the matches that once struck, freeze time for the period that they burn. However, many also have volatile natures that once provoked or misused can have dangerous and wild consequences.

Thirteen-year-old Clover Elkin is thrust into this perilous world when her father, a Russian physician, is killed and she is left to protect the secret Oddity he has kept hidden, even from her. Her father hated Oddities, but he said this one was neobkhodimyy – necessary. Unsurprisingly there are several characters who wish to collect and control these Oddities for different reasons: some from a thirst for knowledge, others for domination, and some out of sheer desperation. Clover crosses paths with them all and learns what she is capable of, and why, from each encounter.

As Clover’s journey takes her across a war-ravaged land full of enchantment and chaos, readers are swept along in this wonderful historical romp that is at times funny, but also heart-wrenching. For ages 10+.

Claire Atherfold is the manager and the children’s book buyer at Readings State Library.

Mina and the Whole Wide World