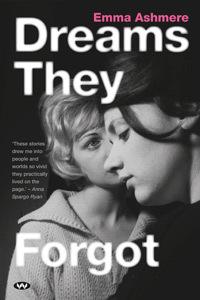 Two sisters await the tidal wave predicted for 1970s Adelaide after Premier Don Dunstan decriminalises homosexuality. An interstate family drive is complicated by the father’s memory of sighting UFOs. Two women drive from Melbourne to Sydney to see the Harbour Bridge before it’s finished. An isolated family tries to weather climate change as the Doomsday Clock ticks.
Emma Ashmere’s stories explore illusion, deception and acts of quiet rebellion. Diverse characters travel high and low roads through time and place - from a grand 1860s Adelaide music hall to a dilapidated London squat, from a modern Melbourne hospital to the 1950s Maralinga test site, to the 1990s diamond mines of Borneo.
Undercut with longing and unbelonging, absurdity and tragedy, thwarted plans and fortuitous serendipity, each story offers glimpses into the dreams, limitations, gains and losses of fragmented families, loners and lovers, survivors and misfits, as they piece together a place for themselves in the imperfect mosaic of the natural and unnatural world.

Emma Ashmere’s debut collection contains stories that have been published and won awards over the last twenty years. Generally, an author’s work improves with time, but all twenty-three stories in Dreams They Forgot are of equal quality. In some collections, stories can blur together, but the diverse locations and historical periods utilised in these stories make each piece memorable.

‘Nightfall’, shortlisted for the Commonwealth Short Story Award in 2019, features “Irish Iris”, a young woman incarcerated in 1860s Adelaide. When she is visited by a woman looking for a lost sister, we learn about Iris’s trauma through what she says and by what she chooses not to reveal.

Many of Ashmere’s characters are hiding their relationships from family or the larger world. In ‘Sketchers’, a couple drive from Melbourne to Sydney to see the Harbour Bridge before its completion, although the narrator is reluctant to return to the city where her estranged family lives. In ‘Standing Up Lying Down’, a woman meets a potential girlfriend on the same day she pursues a diagnosis for troubling symptoms. This is one of the most powerful stories in the collection, notable for what it leaves out and is left to the reader to intuit.

‘Seaworthiness’ contains another of Ashmere’s pet themes: war and its effects. In 1948, Arthur proposes to Clarice and gives her a sizeable diamond ring. But almost in the same breath he tells her he will work his passage to England on an old sailing boat. She asks why and he replies, ‘To get the war out of my system.’ She waits for word from him, and establishes another life she enjoys, with a woman. When she receives news about Arthur, she must make a difficult decision.

Ashmere’s writing is full of metaphor and description, and while it may not suit those who prefer spare prose, I particularly enjoyed this line from ‘Lush Life’, which sees the narrator, ‘…staring at the dimming goldtoothed sneer of the Centrepoint Tower’.