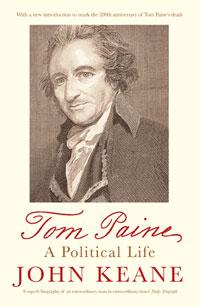 ‘More than any other public figure of the eighteenth century, Tom Paine strikes our times like a trumpet blast from a distant world. His writings still spark disputes about matters of public importance, while his thoughts move public figures as different as Ronald Reagan and Bob Dylan, Salman Rushdie and Margaret Thatcher to quote him - as if to prove that the dead are more sometimes alive than the living.’ So begins John Keane’s magnificent and award-winning biography of one of democracy’s greatest champions. Among friends and enemies alike, Paine earned a reputation as a notorious pamphleteer, one of the greatest political figures of his day, and the author of three seminal books, Common Sense, The Rights of Man, and The Age of Reason. Setting his compelling narrative against a vivid social backdrop of pre-revolutionary America and the French Revolution, John Keane melds together the public and the shadowy private sides of Paine’s life in a remarkable piece of scholarship. This is the definitive biography of a man whose life and work profoundly shaped the modern age.

Amid fears of terrorism, rising tides of xenophobia, and loose talk of 'anti-globalisation', John Keane mounts a defence of global civil society, stressing the need for new democratic ways of living. Keane's provocative...

The definitive biography of Tom Paine, published to coincide with the 200th anniversary of his death