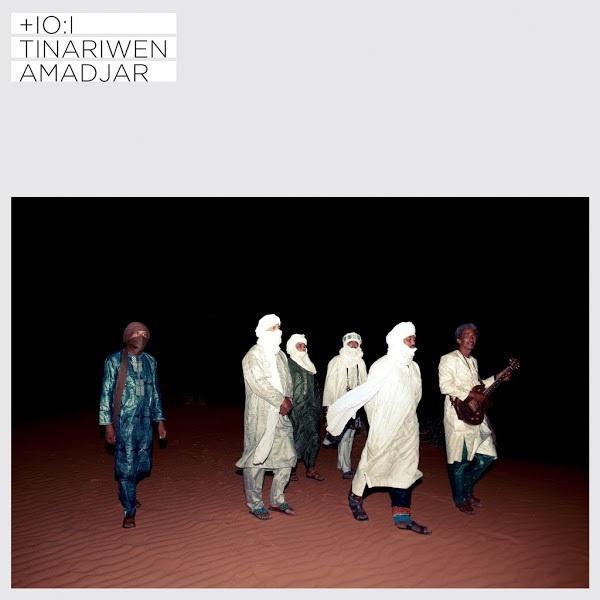 The story of Amadjar - the new album from the Grammy award-winning Tuareg musicians Tinariwen - begins at the end of October 2018 at the Taragalte Festival of nomadic cultures in the Moroccan Sahara. Following their appearance at the festival, Tinariwen hit the road and head for Mauritania, via southern Morocco, Western Sahara and the Atlantic coast, to hook up with the singer Noura Mint Seymali and set up and record their new album there.
Accompanied by their French production team, who arrive in old camper van that has been converted into a makeshift studio, Tinariwen’s journey to Nouakchott, capital of Mauritania, takes a dozen days or so. Every evening, the caravan stopped to set up camp and the members of Tinariwen got to work under the stars to prepare for the recording, talking things through, letting their guitar motifs, thoughts and long buried songs come. Then, during a final two-week camp in the desert around Nouakchott, the band, joined by The Mauritanian griotte Noura Mint Seymali and her guitarist husband, Jeiche Ould Chigaly, recorded their songs under large tent in a few live takes, without headphones or effects.
Once recorded, a host of Western musicians added instrumentation including violin from Warren Ellis of the Bad Seeds, mandolin and charango courtesy of Micah Nelson, and guitars from Stephen O'Malley (Sunn O), Cass McCombs and Rodolphe Burger.
This nomadic album, recorded in a natural setting, is as close as you can get to the ‘soul' of Tinariwen, a group of musicians that in every sense, exist far-beyond their 17-year tenure and extensive discography of critically acclaimed albums.
Lyrically and thematically, the album explores the continuing political, social, humanitarian and environmental problems faced in their home country of Mali and continues Tinariwen’s pursuit to highlight the plight and issues of their people through their music. The album is an eloquent and moving work, specifically highlighting the on-going obstacles faced by their own Tuareg community as a consequence of everything from the collapse of infrastructure and public services, through climate change and the ongoing political and military conflict that has dogged the country since it gained independence in 1960.
$39.95Add to basket ›