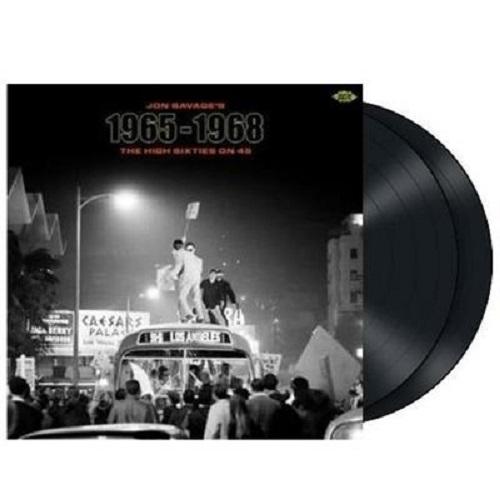 Spread over four sides of two 33rpm 12-inch albums, this is a love letter to the 7-inch single.
Since 2016, author Jon Savage has collaborated with Ace Records in a mapping of the mid-to-late 60s in terms of 45rpm singles. We began with 1966 and time stretched backwards and forwards over 96 songs and four double CDs – one collection per year between 1965 and 1968.
We did discuss releasing the series on LP format but each compilation would have needed a triple album. So, by way of a résumé, we’ve decided to compress the four years into one year per side: beginning in early 1965 and ending in very late 1968.
The intention is to give a flavour of each CD compilation, and an idea of their reach across the two albums. You’ll also find songs that have not been released on any official vinyl album before, including the single version of ‘Rain’ by Kak, the overdubbed ‘People! Let’s Freak Out’ by the Freaks Of Nature and the preview pressing of the MC5’s ‘Kick Out The Jams’, to name but three.
$64.95Add to basket ›