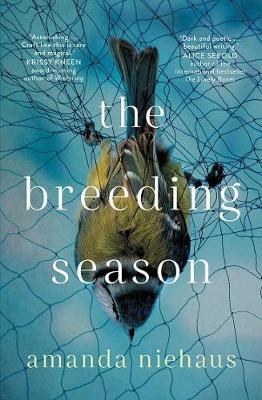 The rains come to Brisbane just as Elise and Dan descend into grief. Elise, a scientist, believes that isolation and punishing fieldwork will heal her pain. Her husband Dan, a writer, questions the truths of his life, and looks to art for answers. Worlds apart, Elise and Dan must find a way to forgive themselves and each other before it’s too late.
An astounding debut novel that forensically and poetically explores the intersections of art and science, sex and death, and the heartbreaking complexity of love. The Breeding Season marks the arrival of a thrilling new talent in Australian literature.

Debut novelist Amanda Niehaus is both a scientist and a writer, and she brings these passions to The Breeding Season. Elise and Dan, a couple in their thirties, experience a late-term pregnancy loss and are plunged into despair. Both have eagerly anticipated baby William’s arrival into their lives. The question at the heart of this emotionally complex novel is: can they find a way to come together, and offer each other comfort after the loss?

Elise, a biologist, returns to work as soon as possible, telling Dan she needs to complete important fieldwork. She sets up camp in the bush near the Sunshine Coast, trapping and tagging small mammals; doing the work she is renowned for – recording breeding patterns.

In alternating chapters, we learn about Dan. He still struggles with the loss of his first love, and of his mother. But it is the father-figure he never had whose absence is most intense. Dan is a writer struggling to complete a commissioned biography of his reclusive, controversial artist uncle. Elise urges Dan to abandon the project and return to writing fiction, but he feels compelled to finish, especially when he meets and is entranced by his uncle’s much younger muse, Hannah.

Elise propels herself further away from Dan – emotionally and geographically – and her traumatic past is revealed. With no family to reach out to, she buries herself in research, and fellow scientists.

The Breeding Season is comparable to the works of Emily Bitto, Jennifer Down and Peggy Frew in its emotional complexity. While Niehaus can be a little heavy-handed with the darker themes, metaphors and plot turns, her writing is lyrical and descriptive. She also creates credible multi-dimensional characters for whom the reader cares greatly; an enviable skill, especially for a debut novelist.