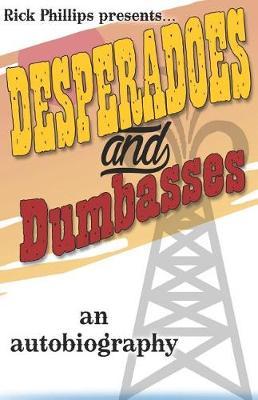 Desperadoes and Dumbasses is the life story of a Texas raised 40-year career oil and gas accountant, fraud examiner and consultant who lived in and worked in and traveled to Indonesia, India, Egypt, Argentina, Mexico and Italy.The story includes management teams described as All in the Family, Asleep at the Wheel, Pyramids, Tango and Tequila. It describes the consequences of management neglect and lack of follow-up. It is also a story of the unusual reply when we asked why something was done a certain way: That’s the way we’ve always done it. The retired Texas Ranger who was hired to help with investigations said this when I asked him why he wore a .44 magnum Revolver: Rick, they don’t make anything else more powerful in a handgun. I knew that same Ranger when he was a Highway Patrolman and I was in high school in Littlefield, Texas. He once drove up on us boys while we were drinking beer on a county dirt road and told us to be sure to throw the cans into the dumpster at the edge of town and DON’T throw them in the Church of Christ or Baptist Church parking lots. He said don’t throw them in the Methodist parking lot either, even though where you find four Methodists you will find a fifth.When an operations manager asked me how our interviews with his people went, I told him he had trained them well-they lived by Hear no Evil, See no Evil, Speak no Evil. The big thing on all menus we saw in West Virginia was macaroni and cheese.I also learned that coffee breaks in the oil and gas business were often deal-making sessions-don’t miss one. Most of the petroleum engineers and geologists I met were sensible people; the engineers were critical thinkers and inquisitive and the geologists were great at observation and analysis. I became life-long friends with many of them.I always liked to think outside the box which annoyed some of the accountants and financial managers I worked with. They’d say, Rick, you ask too many questions. When you are flying over a Borneo jungle in a helicopter, trust the pilot always. When you are riding in a car in Mumbai, India alongside elephants, trust your driver always.I met the love of my life, Mary Helen, in Midland Texas 20 years ago-she is an angel and very active as a Master Gardener. She has two wonderful daughters with three grandchildren who all call her Lala and me Dadeaux. My daughters are very special and I have five grandchildren from them. They call Mary Helen Mimi and call me Papaw.