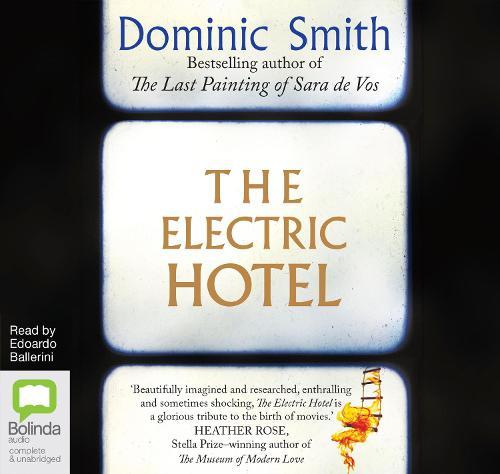 Los Angeles, 1962: Silent filmmaker Claude Ballard’s daily routine is interrupted by an aspiring film student, whose inquiries about Claude’s famous lost film, The Electric Hotel sparks memories of a near-forgotten era. Paris, 1895: 20-year-old Claude Ballard interviews for a job as a ‘concession agent’ for the Lumiere Brothers. With a CV, such that it is, that contains film of his sister’s dying breaths, it’s clear how much Claude will put at stake to realise his dreams … When Claude meets the legendary actress, Sabine Montrose, during the last hours of her 40th birthday in her Manhattan hotel room, inspiration strikes and his fate is sealed. For nearly half a century, Claude Ballard has been living at the Hollywood Knickerbocker Hotel. A French pioneer of silent films, who started out as a concession agent for the Lumiere brothers, the inventors of cinema, Claude now spends his days foraging mushrooms in the hills of Los Angeles and taking photographs of runaways and the striplings along Sunset Boulevard. But when a film-history student comes to interview Claude about The Electric Hotel - the lost masterpiece that bankrupted him and ended the career of his muse, Sabine Montrose - the past comes surging back. In his run-down hotel suite, the ravages of the past are waiting to be excavated: celluloid fragments and reels in desperate need of restoration, and Claude’s memories of the woman who inspired and beguiled him. Spanning three continents and the best part of a century, Dominic Smith takes us on a tour of the heart, to Paris, Manhattan, Brooklyn, the Palisades, Los Angeles, Belgium, Andorra and our very own Tamarama. Luminous, breathtaking, epic and intimate, The Electric Hotel is the new literary masterpiece from the author of the award-winning The Last Painting of Sara de Vos.