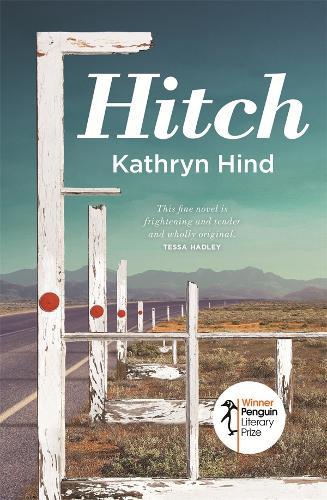 Amelia stands beside a highway in the Australian desert, alone except for her dog and the occasional road train that speeds past her raised thumb.
After her mother’s funeral, Amelia was confronted by Zach and reminded of the relationship they had when she was a teenager. She feels complicit and remains unable to process what happened. So she ran. Her best friend, Sid, is Zach’s cousin and the one person in the world she can depend upon.
But, of course, the road isn’t safe either. Amelia is looking for generosity or human connection in the drivers she finds lifts with, and she does receive that. But she is also let down.
Hitch is a raw exploration of consent and its ambiguities, personal agency and the choices we make. It’s the story of twenty-something Amelia and her dog Lucy hitchhiking from one end of the country to the other, trying to outrun grief and trauma, and moving ever closer to the things she longs to escape.
Kathryn Hind, winner of the inaugural Penguin Literary Prize, writes with acuity, empathy and wisdom. She is a shining new light on the Australian literary scene.

In her debut novel, Kathryn Hind has created a complex and vulnerable character, Amelia, who is hitchhiking around Australia following her mother’s death. Amelia is in her early twenties and has no family except her dog, Lucy, who is on the road with her. When we meet Amelia, she is in the desert beside the Stuart Highway with only a few mouthfuls of water left. She gives the remainder of the water to Lucy, and we soon realise this action is a part of a bigger picture of self-denial and self-harm.

Hitch is sparely written; despite this the reader is drawn into the visceral details of the harsh Australian climate and its impact on Amelia. Amelia has chosen this situation and environment to test herself, and the reader is witness to her battle between annihilation and survival. As the novel progresses, we learn about the trauma Amelia is running from. Keeping this weighty secret has confused and tormented her, and it was something she had hoped to disclose to her mother when she was alive, but was unable to.

Inevitably, Amelia comes across a range of characters as she hitchhikes. Every time a driver stops there are unspoken demands and dangers. There is Will, a kind young man who offers a bed in addition to a ride, but whose brother is demanding and abusive. A strange middle-aged couple wants a family-like dynamic as the woman organises for a roll-away bed for Amelia in their motel room. And then there is ‘Pops’, who poses the biggest threat of all. All throughout her journey Amelia is sustained by the thought of her best friend, Sid, waiting for her, but reaching Melbourne is never a sure thing.

Hitch won the inaugural Penguin Literary Prize for an unpublished manuscript. It is a very readable and compassionate book, and the issues it raises about trauma and recovery are timely and relevant.