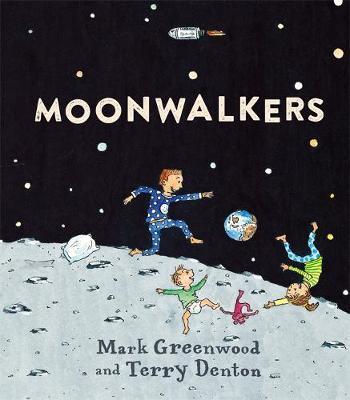 When Apollo 11 blasts off for the moon, the whole world is watching. On the other side of the planet, Billy, Mickey and Buzz decide to be astronauts too.

This year marks the fiftieth anniversary of humans walking on the moon for the first time (that we know of – who knows where the Atlanteans ended up?) and there are a lot of books coming out about this historic event. Moonwalkers by Mark Greenwood (author of the History Mysteries series) and Treehouse illustrator Terry Denton emphasises Australia’s involvement in the Apollo missions via the famous radio telescope at Parkes in NSW, but that’s not the only way it helps Aussie readers connect directly with the moon landing.

The story is told from the perspective of kids Billy, Micky and Buzz who follow the mission in 1969 through crafts, role-play and good old-fashioned daydreaming. Along the way we learn lots of facts about Apollo 11 and the people involved in the mission – and Denton’s illustrations keep it fun and colourful – while the book subtly reinforces the message that creativity and cooperation can bring us all together, whether it’s around a historic moment or around a home-made Saturn V rocket.

Pilgrim Hodgson is a children’s and YA specialist at Readings Kids.