Low-Carbon and Loving It: Adventures in sustainable living - from the streets of India to middle class Australia 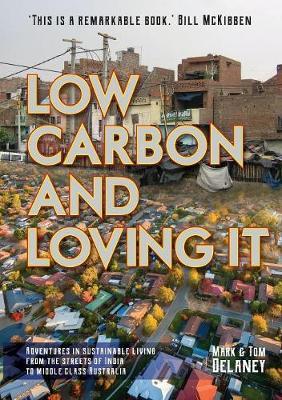 Low-Carbon and Loving It: Adventures in sustainable living - from the streets of India to middle class Australia

Climate change is the most serious issue of our generation. It will likely bring sea-level rise displacing millions, lead to the loss of thousands of species, reduce food production and create geopolitical tensions - all by the end of this century. The fact that human-caused climate change is happening is now beyond dispute in the scientific community, yet despite the awful consequences, many people are apathetic.
Low-Carbon and Loving It is an ordinary person’s, easy-to-read guide to climate change. The book is divided into two sections. The problem of climate change includes sections on the causes of climate change, its consequences and reasons why we’ve done so little up to now. Then the solutions, looks at both ‘big-picture’ and ‘small-picture’ solutions, including concrete ways for the reader to lead a lower-carbon life.
The images, cartoons, ‘Science Geek’ and ‘Myth-busting’ boxes make Low-Carbon and Loving It an enjoyable read. The book gives readers an excellent understanding of climate change and empowers them to start making a personal response.
However, Low-carbon and Loving It is also the story of the Delaneys, an ordinary Australian family who have made some extraordinary choices. Mark and his wife have lived much of their working lives in the slums of India, befriending neighbours who struggle to survive day to day. The Delaneys have continued this lifestyle of voluntary simplicity for two decades. Their experience has given them a very different perspective on life.
It is these unique perspectives which allow father Mark, and co-author son Tom, to see afresh the climate crisis to which many in the West are blind. From their lives, they know a lower-carbon life is possible and even fulfilling, not only in India, but also in middle class Australia.
$24.95Add to basket ›