The Team the Titans Remember 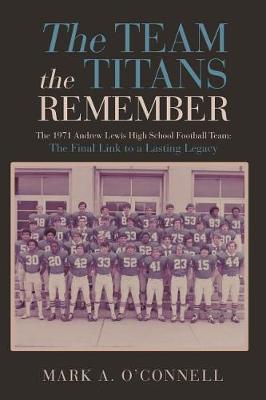 The Team the Titans Remember

In 2000, Walt Disney Pictures released the film Remember the Titans which stirred the hearts of many but falsely depicted the Titans of T.C. Williams playing their arch-rival, George C. Marshall, in a nail-biter of a championship football game decided on the last play in a place called Roanoke Stadium. Wrong! The Titans played a small and scrappy bunch of players from Salem known as the Wolverines of Andrew Lewis High in the historic Victory Stadium of Roanoke. Salem native Mark A. O'Connell sets the record straight for all time in this book which tells the true story of the championship game and also links the 1971 Andrew Lewis High Wolverines to a lasting-legacy which had begun in 1962 under legendary head Coach Eddie Joyce. Now you can read the true–and unaltered–story. Now this from Coach Foster: Andrew Lewis, a small southwest Virginia school located in Salem and nicknamed the Wolverines, played–and won–against some of the largest schools in Virginia, West Virginia, Maryland, North Carolina and Tennessee. Today, these schools would be classified in Virginia as 6A, the largest of all six classifications. During the 1971 season, Andrew Lewis played 7 schools that had student enrollments over 2,000 while Lewis’s enrollment was only 975 students. Lewis was 12-1 that year, its only loss to T.C. Williams (Remember the Titans Game) which had an enrollment of 5,000 students. Between 1962 and 1971, Andrew Lewis won 2 state championships (‘62, '64) and was runner-up 3 times ('66, '67 and '71) as a member of the largest classification in Virginia. Over that span of time–considered as the best years of Coach Joyce –the Wolverines compiled a record of 88 wins, 15 losses and 2 ties–Dale Foster.