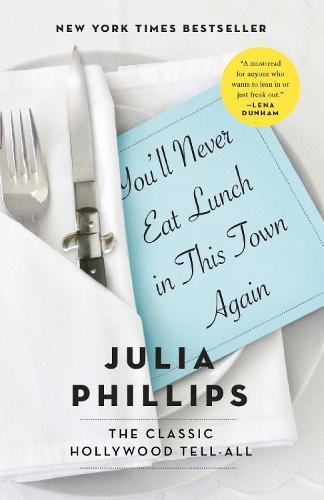 The Hollywood memoir that tells all … Sex. Drugs. Greed. Why, it sounds just like a movie. -The New York Times Every memoir claims to bare it all, but Julia Phillips’s actually does. This is an addictive, gloves-off expose from the producer of the classic films The Sting, Taxi Driver, and Close Encounters of the Third Kind-and the first woman ever to win an Academy Award for Best Picture-who made her name in Hollywood during the halcyon seventies and the yuppie-infested eighties and lived to tell the tale. Wickedly funny and surprisingly moving, You’ll Never Eat Lunch in This Town Again takes you on a trip through the dream-manufacturing capital of the world and into the vortex of drug addiction and rehab on the arm of one who saw it all, did it all, and took her leave. Praise for You’ll Never Eat Lunch in This Town Again One of the most honest books ever written about one of the most dishonest towns ever created. -The Boston Globe Gossip too hot for even the National Enquirer … Julia Phillips is not so much Hollywood’s Boswell as its Dante. -Los Angeles Magazine A blistering look at La La Land. -USA Today One of the nastiest, tastiest tell-alls in showbiz history. -People