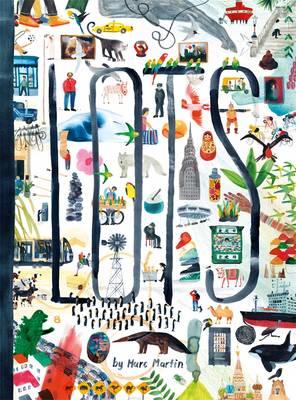 A stunning graphic picture book by award-winng author illlustrator Marc Martin with quirky observations and facts about different places around the world. Hong Kong, the Amazon, Antarctica, India - from the villages, towns and cities where most people live, to the deserts and vast oceans that cover the surface of the Earth, there is lots to discover, experience and learn from our planet.
A book about everything for all ages.

Even the end pages are perfection in Martin’s latest offering Lots, an exploration of prevalent people, creatures and things in various places around the world, depicted in vibrant illustrations. The usual fare of Paris (lots of dogs), New York (taxis) and Tokyo (vending machines) are included, but excitingly enough, they’re joined by less common places like Ulaanbaatar (yaks) and Reykjavik (people named Jon and Anna). Beautifully illustrated with very funny notes, Lenin is ‘accidentally’ almost described as a member of The Beatles on the Moscow page, this is an enjoyable addition to any budding adventurer’s bookshelf.

I Am Doodle Cat