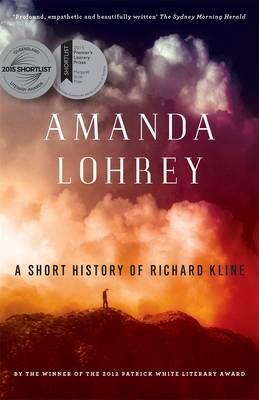 ‘I woke with a gasp. And lay in the dark, open-mouthed, holding my breath. That feeling …that feeling was indescribable. For a moment I had felt as if I were falling …falling into bliss.’
All his life, Richard Kline has been haunted by a sense that something is lacking. He envies the ease with which others slip into contented suburban life or the pursuit of wealth. As he moves into middle age, Richard grows angry, cynical, depressed. But then a strange event, a profound epiphany, awakens him to a different way of life. He finds himself on a quest, almost against his will, to resolve the ‘divine discontent’ he has suffered since childhood. From pharmaceuticals to New Age therapies to finding a guru, Richard’s journey dramatises the search for meaning in today’s world.
This audacious novel is an exploration of masculinity, the mystical and our very human yearning for something more. It is hypnotic, nuanced and Amanda Lohrey’s finest offering yet - a pilgrim’s progress for the here and now.

Plagued by a niggling sense of lack since childhood, Richard Kline approaches middle age struggling to suppress his growing anger. While marriage, fatherhood and career provide glimpses of happiness, the talented software engineer is never wholly satisfied with life, descending repeatedly into cycles of boredom and despair.

When a road rage incident pushes him to the brink, he unwittingly stumbles on a path of spiritual growth through meditation and, ultimately, devotion to a guru. No one is more surprised by this development than Richard himself. But it’s not all glossy eyed meditators in robes from here on. Richard’s path to address the ‘divine discontentment’ he feels is a tough one.

Lohrey’s latest novel continues her interest in creating characters beset by spiritual chaos and the subsequent drive for reinvention. Never trite or superficial in her exploration of spirituality, she preempts a skeptical readership by creating an openly cynical character. And it is perhaps because of the subtle crumbling of Richard’s cool logic that his eventual moments of awakening, and conversely, disappointment and disillusionment are so beautifully and movingly evoked.

Collisions – intended, serendipitous, often calamitous – occur throughout the book, hinting at forces that motivate us and go beyond conscious thought and conventional rationale. As Richard gravitates clumsily to mentors and eventually his own guru (a figure who will be familiar to many yoga devotees), Lohrey cleverly teases out the relationship between devotion and dependence.

New age ideas and therapies are often mined solely for humour in fiction, rather than the intelligent dissection they receive there. It’s ambitious subject matter, tackling the meaning of life head on, but Lohrey’s deft prose and sensitivity to the complexity of portraying her character’s inner life lends Kline’s spiritual quest a level of authenticity that feels utterly convincing. This is a fascinating read by one of Australia’s finest contemporary writers.

Panthers & the Museum of Fire