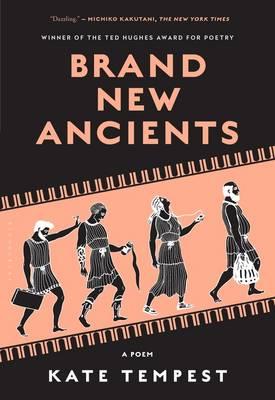 With this dazzling modern myth in verse, Kate Tempest became the youngest winner of the prestigious Ted Hughes Award for New Work in Poetry. Yes, the gods are on the park bench, the gods are on the bus, /The gods are all here, the gods are in us. /The gods are timeless, fearless, fighting to be bold, /conviction is a heavy hand to hold, /grip it, winged sandals tearing up the pavement – /you, me, everyone: Brand New Ancients. Kate Tempest’s words in Brand New Ancientsare written to be read aloud; the book combines poem, rap, and humanist sermon, by turns tender and fierce. Set in Southeast London, Brand New Ancientsfinds the mythic in the mundane. It is the story of two half-brothers, Thomas and Clive, unknown to each other – Thomas the result of an affair between his mother and Clive’s father. Tempest, with wide-ranging empathy, takes us inside the passionless marriage of Jane and Kevin – the man who suspects Thomas is not his son, but loves him just the same – and the neighboring home of Mary and Brian, where betrayal has not been so placidly accepted. The sons of these two households – quiet, creative Thomas and angry, destructive Clive – will cross paths in adolescence, their fates converging with mortal fury. These characters' loves, their infidelities, their disappointments and their small comforts – these, Tempest argues, are timeless. Our lives and our choices are no less important than those of history and myth. Awarded the Ted Hughes Award for New Work in Poetry, Brand New Ancients insists on our importance as individuals – and asserts Kate Tempest’s importance as a talent impossible to ignore.