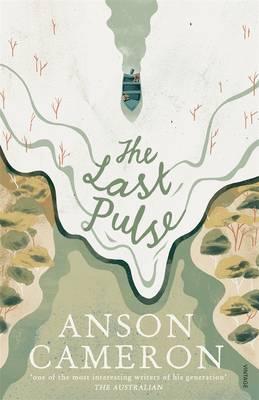 A blackly funny novel about an unlikely hero, and his misadventures on the flood he has created.
In the drought-stricken Riverland town of Bartel in South Australia, after the suicide of his wife, Merv Rossiter steals a boat. He trucks north with his eight-year-old-daughter Em into Queensland. There he blows up the dam at Waroo Station, releasing a flood through outback New South Wales into South Australia. As the authorities search for them, Merv and Em ride the flood south in their stolen boat, rescuing a Queensland Minister from the water, and then a young blackfella who fancies he sang the river to life all by himself. Meanwhile, in Canberra, the political flotsam carried by Merv’s renegade ocean brings the Federal Government to its knees.
The Last Pulse is the story of the last flood that will ever flow down the inland artery that was the Darling River. The stream is broken now and the agriculture and lives of South Australians have been appropriated with the water by a people a thousand kilometres to the north. Throughout their misadventures on his flood, Merv promises his daughter they will be heroes in South Australia, and that they are sailing towards victory parades and happiness. The other crewmembers, however, know he is heading towards a violent reckoning with Australia itself.
Blackly humorous, poignant, timely, The Last Pulse is Anson Cameron’s finest work to date.

Just as the current Environment Minister consulted Wikipedia to dismiss links between climate change and bushfire intensity, I use it to check the status of Australia’s millennium drought and find that it officially ended in 2012. This might explain why I haven’t heard as much about the poor health of the Murray Darling Basin as in years past. However, a quick internet search reveals that disputes between irrigators, state governments, environmental groups and the Murray Darling Basin Authority are still in full swing and, with the news that October was one of the driest months on record for Eastern Australia, the largest river system in Australia may be set to make headlines again. This makes Anson Cameron’s hilarious but sobering satirical novel on the politics of water management in Australia most timely.

The premise is farcical: Merv is a failed farmer from drought-stricken South Australia who steals a boat and heads to Queensland. There, he blows up a dam to release a flood which he then rides back down the river to the applause of all who have lived for decades in the dry and dying Basin. Along the way he inadvertently rescues the Queensland Environment Minister from a floating portable toilet, and their late night conversations cover the problematic politics of the issue. No stereotype is spared here and while some of the satire is a little heavy-handed at times, the novel does manage to brilliantly reflect the ludicrousness of environmental management in this country. Merv is often eloquent on the subject but he is under no illusion that he has found a long term solution. The title of the novel comes from his reflection that ‘this flood is the last pulse ever coming down this artery’. It’s great to read an Australian novel that tackles climate change and politics and as the novel’s fictional federal Environment Minister wisely muses, ‘it took the Middle East a thousand years and race and religion to tie a knot of hate that can’t be undone. We’ve done it in a generation … using only water.’