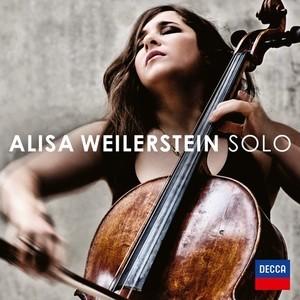 The 20th Century was significant in affirming the cello’s place as a premiere solo instrument.

Committed to expanding the cello repertoire, Alisa is a fervent champion of new music and this release is her first solo album.
The American cellist has attracted widespread attention worldwide for her combination of natural virtuosic command and technical precision with impassioned musicianship. The intensity of her playing has regularly been lauded, as has the spontaneity and sensitivity of her interpretations. Following her Zankel Hall recital debut, New York Magazine wrote: “Whatever she plays sounds custom-composed for her, as if she has a natural affinity with everything”.
TRACKLISTING:

Alisa Weilerstein is one of those musicians born for their instrument. Debuting at the ripe old age of 13 with the Cleveland Orchestra, she has taken the world by storm with her cello performances of old and new works. Luckily for us, she’s coming to Melbourne to perform a single show of her solo repertoire. Including the works of Bach to Golijov (who she has worked extensively with), this show is not to be missed. However, if you can’t wait until then, get a copy of her new album, Solo, which features some of the works she will be performing.

Weilerstein starts her album with a solo Cello Sonata by Kodály. Written during the height of World War I, it is considered a standard work for a cellist to learn, as it was the first major work for solo cello written since Bach’s epic Suites. Having never heard it myself until listening to this album, I found it more challenging than Bach’s works, and therefore much more interesting. Technically, Weilerstein took my breath away with her mastery of this work, and musically it had so many interesting corners; it took a number of listens until I felt I started to understand Kodály’s overall intention.

Following this massive work is Omaramor, by Golijov. This is a stormy work, testing what the cello is able to achieve and what our ears can recognise. There are constant hints at tango rhythms, but just when it seems a groove has been set, Golijov turns the music away. This does not detract from the music; instead, it lends it more of an authoritative air. You feel Golijov and Weilerstein know the answer to everything together but as yet, are not ready to share it. If you can’t make the concert, at least make sure that you listen to this stunning album.