The Biographical Dictionary Of Literary Failure 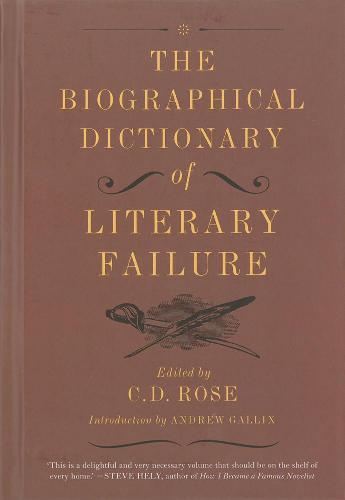 The Biographical Dictionary Of Literary Failure

A darkly comic, satirical reference book about writers who never made it into the literary canon A signal event of literary scholarship, The Biographical Dictionary of Literary Failure compiles the biographies of history’s most notable cases of a complete lack of literary success. As such, it is the world’s leading authority on the subject. Compiled in one volume by C. D. Rose, a well-educated person universally acknowledged in parts of England as the world’s pre-eminent expert on inexpert writers, the book culls its information from lost or otherwise ignored archives scattered around the globe, as well as the occasional dustbin. The dictionary amounts to a monumental accomplishment- the definitive appreciation of history’s least accomplished writers. Thus immortalized beyond deserving and rescued from hard-earned obscurity, the authors presented in this historic volume comprise a who’s who of the talentless and deluded, their stories timeless litanies of abject psychosis, misapplication, and delinquency. It is, in short, a treasure.