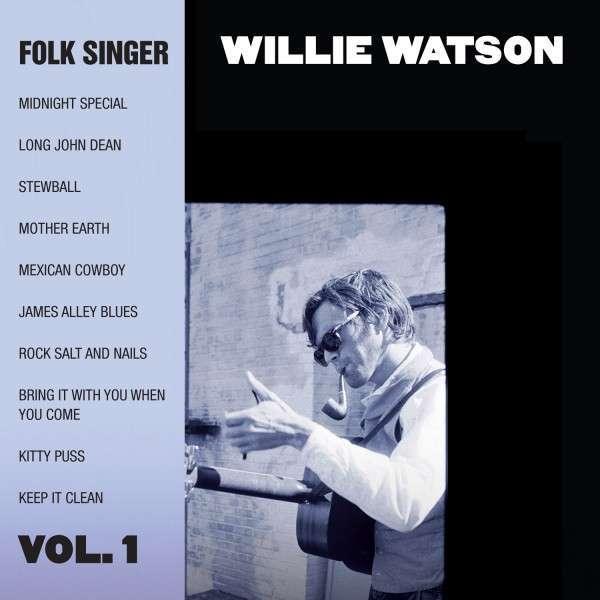 Folk Singer Volume 1 is the debut solo album from Willie Watson. Produced by David Rawlings, the album features ten songs, from folk standards to obscure gems. A true solo album in every sense, hearing Watson’s skillful and subtle banjo and guitar accompaniments and soaring vocals unadorned for the first time is a revelation.

Don’t let the cover and title of this album put you off. The black-and-white cover art depicts Willie Watson smoking a pipe and wearing dark sunglasses, an acoustic guitar slung around his shoulders like some throwback early 60s folk hopeful – he looks like a bit of a joke, but once Watson starts to sing, he draws you right in.

Watson was the founder of much loved American string band Old Crow Medicine Show, and this ultra-stark production is courtesy of Gillian Welch’s musical collaborator David Rawlings, who also produced for OCMS and is a friend of Watson. Many of the tunes here were lifted from a bunch of old 78s and LPs from Watson’s parents’ record collection. This bunch of both unusual and familiar classic blues and folk tunes from the 1920s onwards is extremely well chosen and performed with an intensity you rarely hear these days: Dave Van Ronk springs to mind, as does very early Bob Dylan and of course Woody Guthrie. Watson has brilliantly made the transition from acoustic rhythm playing in a band to solo performer, adapting his picking style to fill in the spaces and provide rock solid accompaniment to his powerful singing.

Highlights include a dramatic ‘Rock, Salt and Nails’, the banjo song ‘From Bowling Green’, and the slow blues of ‘Mother Earth’, with more emerging on each listen. If you loved the sound and feel of Inside Llewyn Davis but want some extra grit, give this a listen.