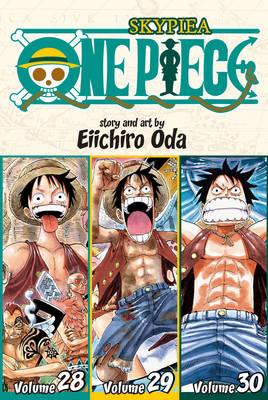 Join Monkey D. Luffy and his swashbuckling crew in their search for the ultimate treasure, the One Piece. As a child, Monkey D. Luffy dreamed of becoming King of the Pirates. But his life changed when he accidentally ate the Gum-Gum Fruit, an enchanted Devil Fruit that gave him the ability to stretch like rubber. Its only drawback? He’ll never be able to swim again-a serious handicap for an aspiring sea dog! Years later, Luffy sets off on his quest to find the One Piece, said to be the greatest treasure in the world… Luffy and the Straw Hats clash mightily on the sky island of Skypiea with a wannabe deity named Kami Eneru. Kami’s got an arsenal of thunderously destructive weapons at the ready, but the Straw Hats are just as determined to win the battle. At stake is a bounty of gold beyond the pirates' wildest imagination!