Narcoland: The Mexican Drug Lords and Their Godfathers 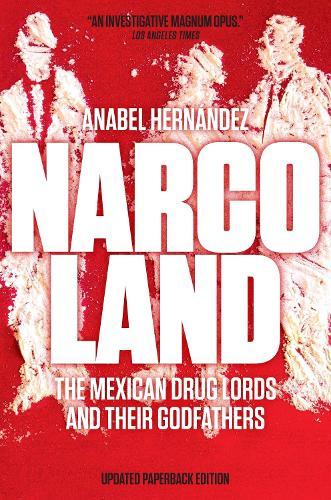 Narcoland: The Mexican Drug Lords and Their Godfathers

Narcoland describes a disastrous ‘war on drugs’ that has led to more than 80,000 deaths in half a dozen years. This is a book that exposes how everything in Mexico is implicated in the ‘narco system.’ Anabel Hernandez, journalist and author, accuses the Mexican state of complicity with the cartels, and says the ‘war on drugs’ is a sham. She’s had headless animals left at her door and her family have been threatened by gunmen. Narcoland became, and remains, a bestseller: more than 100,000 copies sold in Mexico. The success is impossible to overstate, a staggering figure for a non-fiction book in a country with indices of income and literacy incomparable to the American-European book-buying market.,The most remarkable feature of Anabel Hernandez’s brave and invaluable account of Mexico’s blood-drenched drug wars is that she survived long enough to write it. We would all be poorer without Hernandez’s determination to account for a civil conflict that has cost at least 60,000 lives. There could be no greater shame for Mexico should such a fearless and dedicated reporter come to any harm. Narcoland, with its explosive descriptions of decades of corruption permeating the upper echelons of government, leaves an extremely bad taste in the reader’s mouth about the state of Mexico’s perennially corrupt institutions - and begs the question: how much has changed? For Narcoland, Anabel Hernandez spent five years combing police, court and US papers, securing access to informers and sources and pursuing often fruitless requests for official files. The result is a searing indictment of a war on drugs she believes was a sham from the start.The stark truth of a sham ‘war’…A product of five years' investigative reporting, Hernandez’s meticulously researched explanation of the links between the Sinaloa cartel, the world’s biggest criminal organisation, and Mexico’s leadership makes for jaw-dropping reading.,In this brave work, the author argues that since the presidency of Gustavo Diaz Ordaz (1964 - 1970), all of Mexico’s rulers have maintained close relations with groups that import, export, and sell illegal drugs. Indispensable reading for anyone who wants to understand the origins of the violence …An extraordinary book for making the necessary journey to our heart of darkness.