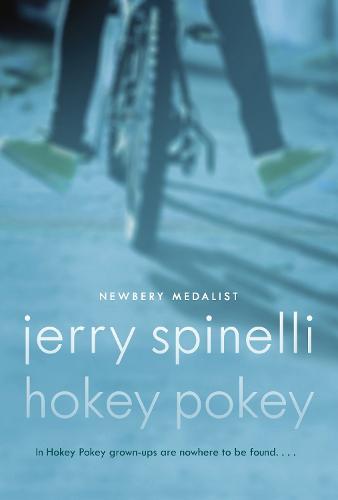 Welcome to Hokey Pokey. A place and a time, when childhood is at its best- games to play, bikes to ride, experiences to be had. There are no adults in Hokey Pokey, just kids, and the laws governing Hokey Pokey are simple and finite. But when one of the biggest kids, Jack, has his beloved bike stolen-and by a girl, no less-his entire world, and the world of Hokey Pokey, turns to chaos. Without his bike, Jack feels like everything has started to go wrong. He feels different, not like himself, and he knows something is about to change. And even more troubling he alone hears a faint train whistle. But that’s impossible- every kid knows there no trains in Hokey Pokey, only tracks. Master storyteller Jerry Spinelli has written a dizzingly inventive fable of growing up and letting go, of leaving childhood and its imagination play behind for the more dazzling adventures of adolescence, and of learning to accept not only the sunny part of day, but the unwelcome arrival of night, as well.