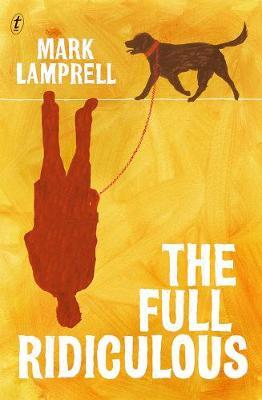 Michael O'Dell is hit by a car. When he doesn’t die, he is surprised and pleased. But he can’t seem to move from the crash position. He can’t concentrate, or control his anger and grief, or work out what to do about anything much.
His wife Wendy is heroically supportive but his teenage children don’t help his post-accident angst: daughter Rosie punches out a vindictive schoolmate and all hell breaks loose; son Declan is found with a stash of illicit drugs. A strange policeman starts harrassing the family and ordinary mishaps take on a sinister desperation. To top it all off, Michael’s professional life starts to crumble.
With this funny, compelling novel about love, family and the precarious business of being a man, Mark Lamprell’s extraordinary debut examines the terrible truth: sometimes you can’t pull yourself together until you’ve completely fallen apart.

After finishing The Full Ridiculous, it’s hard for me to imagine that the phrase, ‘somehow it feels like the world is against me’, has ever been more apt than for the character of Michael O’Dell. While out on one of his daily jogs, he is hit by a car, and that’s only the beginning.

Although he’s fine – physically – after the crash, Michael struggles to get back into everyday life. As the plot unfolds his luck gets horrifyingly bad; a string of events trigger one another like a set of dominoes, with Michael in a crumpled heap at the end of the row. His teenage children give him grief, his wife waits patiently for him to pull his weight financially, he’s lost his job and the book he’s writing is flailing – it’s a bad scene all over. His misfortune, however, makes for really enjoyable reading, and the worse Michael’s situation got the faster I seemed to read.

Told in the second person, an often cynical narrator reminds Michael of things like: ‘You remember most of that year like you never forget the squeal of nails down a blackboard.’ There’s humour in Michael’s hopelessness as he assesses all of his flaws as a husband, father and man, and I couldn’t help but laugh, despite how terrible his situation gets.

Although this is his debut novel, it’s obvious Mark Lamprell has a bit of experience under his belt. Lamprell’s written mostly for the screen; he co-wrote the film Babe: Pig in the City, and this background really shows in the way he puts his scenes together. The plot is action driven and fast paced, the novel short enough to maintain suspense without being exhausting. The prose is quirky and snappy; I managed to tear through this book in a couple of sittings.

I’d recommend The Full Ridiculous for anyone wanting an entertaining, lighthearted read – it’s been categorised as being in the same vein as The Rosie Project and The Curious Incident of the Dog in the Night-Time.