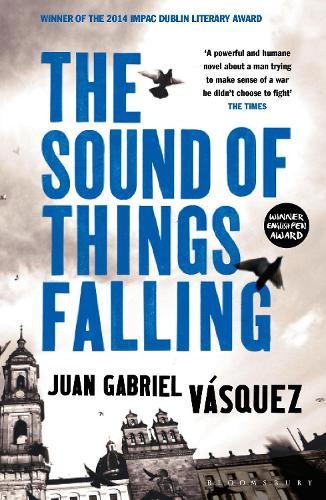 Winner of the International IMPAC Dublin Literary Award 2014 Winner of the Alfaguara Prize 2011 Winner of the Gregor von Rezzori Prize 2013 No sooner does he get to know Ricardo Laverde in a seedy billiard hall in Bogota than Antonio Yammara realises that the ex-pilot has a secret. Antonio’s fascination with his new friend’s life grows until the day Ricardo receives a mysterious, unmarked cassette. Shortly afterwards, he is shot dead on a street corner. Yammara’s investigation into what happened leads back to the early 1960s, marijuana smuggling and a time before the cocaine trade trapped Colombia in a living nightmare.

I have a new crush. Juan Gabriel Vásquez, author of The Sound of Things Falling. Set in Bogota in the 1990s and 60s, this book is part love story, part digging-into-your-shady-buddy’s-past. The opening line, an absolute cracker, is reminiscent of early Auster and sets the tone for the entire encounter: ‘The first hippopotamus, a male the colour of black pearls weighing a ton and a half, was shot dead in the middle of 2009.’

As it turns out, Antonio Yammara has nothing to do with hippopotamuses (hippopotami?), but the connection plays out as the novel progresses. Yammara is a law lecturer in his late twenties, benignly negligent of his girlfriend and their baby, obsessing instead over why he was accidentally shot in the stomach when his friend, Ricardo Laverde was murdered by two guys on motorbikes.

Yammara increasingly turns away from his girlfriend and baby, spending more time getting to know his dead friend. He traces the love story of Laverde and Elena Fritts through the letters and other paraphernalia hoarded by their daughter, Maya. As the book progresses, Yammara slowly peels back secrets – secrets of Laverde and of the Colombian drug trade – as well as revealing his own true nature through the things he keeps from Maya.

I admit I felt vaguely unsatisfied by the ending of this book but, on the other hand, I also liked that everything wasn’t tied up and presented back to the reader in a neat package. If Vasquez ends up being something like the new Auster, the world would be a better place for it.

Gabrielle Williams is from Readings Malvern