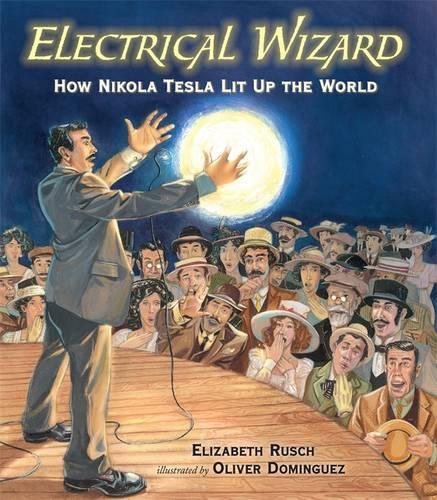 Move over, Thomas Edison! Nikola Tesla takes the spotlight in a biography of the man who pioneered modern electrical engineering – and changed the course of history. When a Serbian boy named Nikola Tesla was three, he stroked his cat and was enchanted by the electrical sparks. By the time he was a teenager, he had made a vow: Someday I will turn the power of Niagara Falls into electricity. Here is the story of the ambitious young man who brought life-changing ideas to America, despite the obstructive efforts of his hero-turned-rival, Thomas Edison. From using alternating current to light up the Chicago World’s Fair to harnessing Niagara to electrify New York City and beyond, Nikola Tesla was a revolutionary ahead of his time. Remote controls, fluorescent lights, X-rays, speedometers, cell phones, even the radio – all resulted from Nikola Tesla’s inventions. Established biographer Elizabeth Rusch sheds light on this extraordinary figure, while fine artist Oliver Dominguez brings his life and inventions to vivid color. Back matter includes additional information about Tesla, scientific notes and explanations, source notes, a bibliography, and suggestions for further reading.

Successfully distilling an incredible life’s work into an informative and inspiring picture book is no mean feat. Yet this biography of revolutionary thinker and inventor Nikola Tesla does just that. We learn that as a boy Tesla was entranced by the awesome power of nature and dreamt of harnessing it to build a better world: in pursuit of his dreams he transformed the 20th century.

Electrical Wizard is a book to excite inquiring minds with an inspiring message – that what we dream today may power the world tomorrow. Highly recommended for children aged 8 years and up.

END_OF_DOCUMENT_TOKEN_TO_BE_REPLACED

Tiny Creatures: The World of Microbes

Picturepedia: An Encyclopedia on Every Page

Genius!: The Most Astonishing Inventions of all Time

END_OF_DOCUMENT_TOKEN_TO_BE_REPLACED

The Little Factory of Illustration