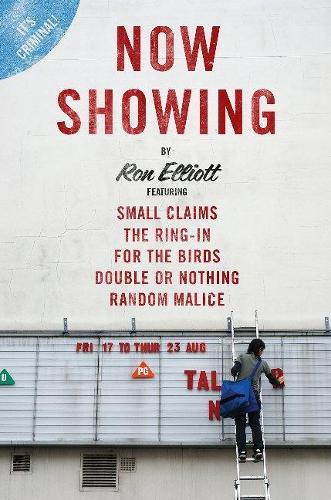 Brimming with cinematic references, Now Showing is best consumed with a tub of hot popcorn.
“With the whip-crack tenacity of a Raymond Chandler novel, we are pushed right into the heart of the action and emerge breathless and bloodied. Hop into the driver’s seat alongside a cast of drifters, psychotics and hapless losers.”

Now Showing is quick, punchy and pulls you from page to page like a series of explosions. That is, it takes you to the movies. Ron Elliott’s second book comprises of five long short stories – novellas, really – that depict a relationship drama in the desert, a botched mafia job, a post-office heist gone wrong, the mishaps of a gambler and a crazy sociopath who can’t handle not getting his way. All of this is peppered with sharp dialogue and plenty of guns – some of them homemade.

Elliott is a screenwriter by trade and these stories are the result, in his own words, of ‘adapting backwards’. That is, transforming his unpublished screenplays into prose. ‘They taste a little like films,’ he says in the introduction, and ‘if you don’t like movies, you won’t like these stories’. For Elliott hasn’t just rewritten his film ideas in the short story form, he’s actually attempted to retain the cinematic nature of the original screenplays, focusing on the traditional three-act structure; short, crosscut scenes; a sense of immediacy; and the inscrutability of a character’s inner thoughts.

I confess, I was initially sceptical – but it worked. When I visualised the stories as if I were watching them on television, they really came to life. Dialogue and description that would’ve perhaps seemed wooden in a more traditional novel seemed incredibly vivid and convincing when I imagined it being enacted by the characters on my favourite TV shows.

Elliott states that the stories aren’t for literary consumption, but are for reading while consuming popcorn, which I think is an apt description. The speedy, action-packed nature of the stories means you can read through them quickly without missing anything, and have clear, colourful imagery in your head at the same time. A very fun read

Julia Tulloh is a freelance writer and a PhD candidate in American Literature.