The Five Deaths of Roxanne Love 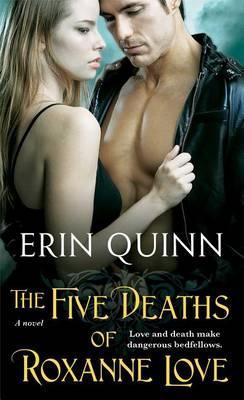 The Five Deaths of Roxanne Love

In award-winning romance author Erin Quinn’s exciting new paranormal series, a woman who can’t die meets the man destined to kill her. She cheated death… All Roxanne Love has ever wanted is to be normal-marriage, kids, the life of June Cleaver. She tries to fit in but can’t conceal her ability to defy death-not from the world, not from the darkest creatures of the Beyond and not from the Reaper determined to destroy her. Now Roxanne is on the run, her only ally a compelling, dangerous detective with secrets of his own. Against her will, she’s drawn to his quiet strength and heated touch. But can she trust him? …until she felt death’s kiss. Incognito as guilt-ridden cop, Santo Castillo, the Reaper’s plan is simple: get close to Roxanne, uncover the secret of her immortality and cut it at the source. Yet with this borrowed body come emotions the Reaper hadn’t expected. Now nothing is clear but his conflicted desire to protect the woman he came to kill. As destiny forces them to face an enemy hell-bent on using Roxanne to wipe out all of mankind, she and Santo must choose between love…and salvation.