Starring Jules (As Herself) 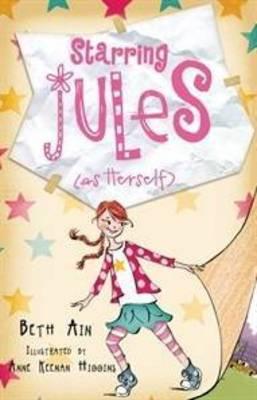 Starring Jules (As Herself)

Lights! Camera! Action! A hilarious chapter book debut from a fabulous new talent! Things to Know About Me by Jules Bloom 1. I am a scrambled-eggs-and-chocolate-milk type person. 2. I have an audition for a TV commercial (which would be great if I were a tall-icy-drink type person). 3. I am in between best friends right now. 4. I am worried that the audition will be a disaster. (See #1 and #3!) Jules Bloom wears mismatched socks on purpose, dreams of having pizzazz, and sings made-up jingles in public. But she never thought anyone would notice. Now Jules has an audition for a TV commercial, and she doesn’t want to ruin THE OPPORTUNITY OF A LIFETIME. She’s willing to turn to anyone for help - even her know-it-all ex-best friend! If only that lovely new girl in class would turn out to be the new best friend of her dreams then maybe, just maybe, Jules will be ready for her close-up.

Jules Bloom is the central character in this new series that will appeal to fans of Judy Moody.

Quirky, fun and wholesome, the first story sees Jules tying herself in knots about an audition for a TV commercial – the trouble is that the audition involves gargling orange mouthwash and Jules has terrible associations with the flavour of orange.

Like a lot of US fiction, the young characters sound older than they are, but Jules is not overly sassy for the six-to-nine-year-olds this book is aimed at. Sweet illustrations, sound themes relevant to the age group and a heart-warming sibling relationship complete the picture.