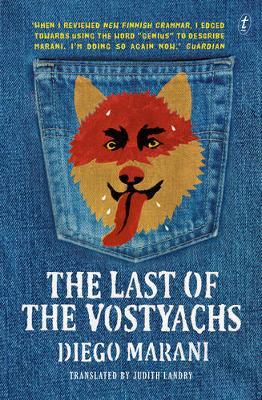 An inventive tale of a long-lost language and culture, forgotten but for a single man.

He felt a shiver run down his spine when he heard the lateral fricative with labiovelar overlay ring out loud and clear in the chill air…It set forgotten follicles stirring in the soft part of his brain, disturbing liquids that had lain motionless for centuries, arousing sensations not made for men of the modern world.

Ivan grew up in a gulag and held his dying father in his arms. Since then he has not uttered a word. He has lived in the wild, kept company only by the wolves and his reindeer-skin drum. He is the last of an ancient Siberian shamanic tribe, the Vostyachs, and the only person left on earth to know their language.

But when the innocent wild man Ivan is found in the forests by the lively linguist Olga, his existence proves to be a triumphant discovery for some, a grave inconvenience for others. And the reader is transported into the heart of the wildest imagination.

In 1942 Hitler paid the Finnish leader Marshal Mannerheim a surprise visit for his 75th birthday, leaving the national hero reticent and embarrassed. One wonders what Diego Marani’s fictional acolyte of Finnish patriotism in The Last of the Vostyachs, Professor Aurtova, would have thought of a similar visit, for it’s unlikely a more insidious, bigoted character exists elsewhere today. Head of Finno-Ugric languages at the University of Helsinki, Aurtova is on a quest to destroy the last surviving language of an ancient, shamanic tribe that connects Finland to pre-Columbian North Americans. An academic triviality? Perhaps, but Marani strives to wind a plot round the issue of ethnic nationalism and hits the mark.

Ivan, the last of the Vostyachs, wakes to find that the Russian soldiers who killed his father and kept him prisoner in a Siberian work camp for 20 years have left. He runs into the woods and starts speaking again, quickly realising that he can commune with animals through speech and music. This concept of unity between nature and language doesn’t exist in English, and may be clearer in the original Italian, but Marani doesn’t slip into banal fantasy. After all, this is an author who invented his own language – Europanto – and whose primary concern is how international understanding rests with a shared language.

Aurtova has no redeeming qualities whatsoever. His brutal cunning and misogyny leave us more interested in the emotional complexities of his ex-wife, Margareeta, and the Russian linguist, Olga, who discovers Ivan in a village and sends him to Helsinki to appear at the Congress of Finno-Ugric languages. What follows is part mystery, part Scandinavian-noir, with a splash of 12 Monkeys. Published to acclaim in Italy 10 years ago, and last year in the UK, this one doesn’t trump Marani’s New Finnish Grammar, but has all the same concerns, albeit in a different uniform.

Luke May is a freelance writer.