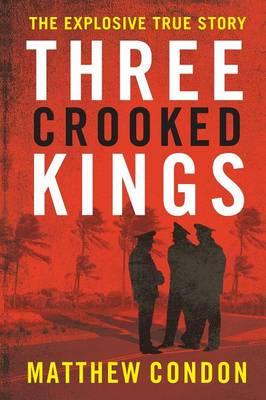 Terence Murray Lewis lifted himself out of poverty and emotional neglect to reach the pinnacle of power as the knighted Commissioner of Police in Queensland. Then, with the advent of the Fitzgerald Inquiry into Police Corruption in 1987, his life and that of his family fell apart overnight. He served ten years in prison for official corruption. At 84, he now lives a spartan life in a north Brisbane suburb.
In Three Crooked Kings, Lewis - the missing piece in the puzzle of the story of Queensland’s endemic generational corruption - speaks for the first time and offers his version of the narrative. Also, with unprecedented access to Lewis' personal papers that cover everything from his induction as a constable in 1949, his complete official police diaries and previously confidential police documents to his private prison diaries, Three Crooked Kings is the definitive account of an era that changed Queensland society.
Matthew Condon spent two years interviewing Lewis, and has additionally interviewed hundreds of his contemporaries, former premiers and politicians, petty criminals and standover merchants, and ordinary Queenslanders and their relatives who unwittingly got caught up in a corruption network that traversed decades. Its impact reverberates to this day. Told decade by decade from the 1950s to the present day, the book also investigates the birth of the so-called Rat Pack in the late 1950s, the consolidation of corruption under former commissioner Frank Bischof in the 1960s, the pivotal alleged suicide of prostitute Shirley Brifman in the 70s, the collapse of the separation of powers in the 1980s that allowed corruption to freely infect the government and the judiciary, and Lewis' time as a prison inmate in the 1990s.
Three Crooked Kings is not just a social history over half a century, but a grand narrative teeming with murder, pay-offs, political machinations, drug heists, assisted suicides, police in-fighting and a complicated system of corruption that ultimately collapsed under its own weight.
$32.95Add to basket ›