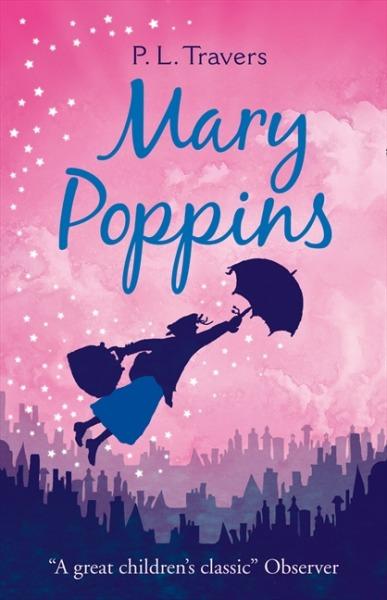 A new edition of this classic title - tieing in to the stage show musical which launches in Melbourne in July 2010. The classic tale from Australian author, P.L Travers. Ages 9+
When the Banks family advertise for a nanny, Mary Poppins and her talking umbrella appear out of the sky, ready to take the children on extraordinary adventures. Mary Poppins is strict but fair, and soon Michael and Jane are whisked off to a funfair inside a pavement picture and on many more outings with their wonderful new nanny! Needless to say, when at last ‘the wind changes' and she flies away, the children are devastated. But the magic of Mary Poppins will stay with the Banks family forever.
The original story of the world’s most famous nanny, Mary Poppins, is a timeless classic that has enchanted generations.

Like a lot of kids, my first experience of Mary Poppins was of the spit-spot, spoonful-of-sugar, supercalifragilisticexpialidocious variety. I watched the Disney musical religiously, and was infatuated (and impressionable!) enough to write my own letter to Mary Poppins and deposit it in the fireplace. I didn’t discover the ‘real’ Mary Poppins until I was in my teens, which meant that I was the perfect age to really appreciate the vain, snarky, half-wild creature she is in her literary incarnation.

P.L. Travers’ Mary Poppins is a wonderful contradiction – her severe appearance (shiny black hair, thin with large feet and peering blue eyes) and terse responses belie the magic that she has running through her veins. She’s stroppy and obstinate, whether she’s bobbing about on the ceiling taking tea or feeding the birds at St Paul’s Cathedral, and yes she might be able to speak to animals, but she usually only employs it to give them a dressing down. Each chapter in Mary Poppins is a self-contained adventure, and while some are familiar from the film, the book includes stories that are a bit more fey, a bit less pretty. There’s Mrs Corrie who snaps off her barley-sugar fingers for treats, a nocturnal zoo where the humans are caged for the animal’s enjoyment, and a shopping trip with a fallen star (Maia, the second of the Pleides). The stories are illustrated by Mary Shepard, the daughter of Winnie-the-Pooh illustrator E. H. Shepard, and they have a similarly endearing 1930s nostalgia to them. Shepard’s Mary Poppins is based on a wooden peg doll that P.L. Travers used to play with during her childhood in Queensland: straight up and down without an ounce of softness. No nonsense. Much like Mary Poppins herself.