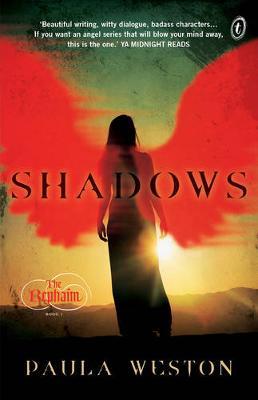 Love. Nightmares. Angels. War. It’s been almost a year since Gaby Winters was in the car crash that killed her twin brother, Jude. Her body has healed in the sunshine of Pandanus Beach, but her grief is raw and constant. It doesn’t help that every night in her dreams she kills demons and other hell-spawn. And then Rafa comes to town. Not only does he look exactly like the guy who’s been appearing in Gaby’s dreams, he claims a history with her brother that makes no sense. Gaby is forced to accept that what she thought she knew about herself and her life is only a shadow of the truth - and that the truth is more likely to be found in theshadows of her nightmares. Who is Rafa? Who are the Rephaim? And most importantly - who can she trust? Fast-paced and wildly compelling, Shadows, the first book in the Rephaim series, is a stand-out paranormal romance for fans of Richelle Mead and Stephenie Meyer.

By day, Gaby Winters struggles to return to life after a horrible car accident killed her twin brother Jude. Her body heals slowly in the tropics of Pandanus Beach. Her scars are vicious, and her grief is raw and constant.

By night, she is haunted by dreams of killing hell-spawn and demons alongside a sexy green-eyed stranger. When the stranger arrives in town, claiming a history with both Gaby and Jude that makes no sense, Gaby is forced to admit that all her memories are a lie, and that the truth lies in her terrifying dreams. Who are the strangers that suddenly appear in Pandanus Beach, ready to start a tug-of-war over her allegiance? And … who can she trust?

Shadows promises a fantastic trilogy, perfect for any readers suffering withdrawal from any number of fantasy/love/action series much like those of Stephanie Meyer or Richelle Mead, and recommended for ages 14 and up.

Set in Queensland, Paula Weston paints a picture of a town much like Noosa, but where demons and hell hounds roam the rainforests and half-angel warriors tussle and fight down by the beach. The whole idea is original and seems almost feasible, based on scores of angelic history.

I love the characters of Gaby and Rafa. Their relationship doesn’t feel forced, like Paula Weston just felt compelled to create one hot guy and one hot girl and put them into a room together along with a slew of forced witty banter. Weston obviously didn’t feel obliged to shelter her audience from the reality of a foul-mouthed heroine, and I applaud her realism. Gaby is the kind of character that, no matter who you are, feels just like you.

Book Two in The Rephaim series is due in May 2013

The Rephaim Series by Paula Weston

What would you do if your nightmares became a reality? Gaby Winters is about to find out. Fallen angels, gang warfare and hot romance, this is a fast-paced, compelling debut novel from a fresh new voice in YA.

Gaby Winters' nightmares have become a reality. Her next move could change everything. Fallen angels, gang warfare and hot romance, this is the sequel to Paula Weston's debut novel, SHADOWS.

As kick-ass as Buffy, as cool as True Blood and as sexy as Fallen, this is the third in Paula Weston's explosive Rephaim series.

As kick-ass as Buffy, as cool as True Blood and as sexy as Fallen, Burn is the fourth and final book in Paula Weston's explosive Rephaim series, completing the story started in Shadows, Haze and Shimmer.