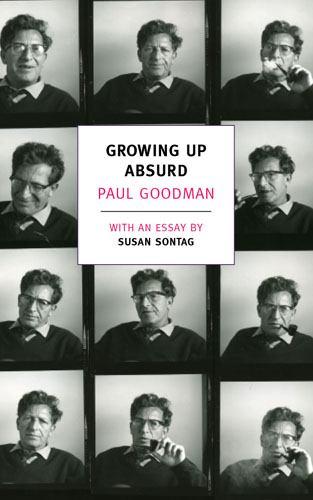 Paul Goodman’s Growing Up Absurd was a runaway bestseller when it was first published in 1960 and it became one of the defining texts of the nascent New Left. Goodman, at the time well into middle age, was a maverick anarchist who broke every mold, and did it brilliantly he was a novelist, poet, and a social theorist, among a host of other things and the book’s success established him as one of America’s most unusual and trenchant critics, combining vast learning, an astute mind, utopian sympathies, and a wonderfully hands-on way with words. Growing Up Absurd takes the crisis of disaffected youth as indicative of the crisis within the culture at large, which Goodman describes as being run by corporations that provide employment (when they do) but not work in any meaningful sense, work that engages body and soul. Disaffected youth was in this sense at the forefront of a disruption of a social order that was, if not directly politically repressive, humanly repressive, stifling the real human potential which, surely, a good society would serve to unleash, encourage, and pass on.