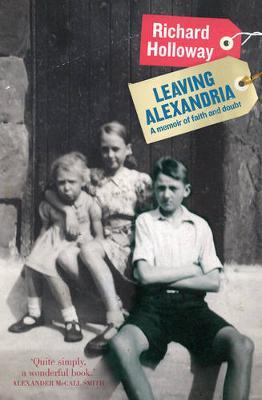 At fourteen, Richard Holloway left his working-class home north of Glasgow and travelled hundreds of miles to an English monastery to be trained for the priesthood. By twenty-five, he had been ordained and was working in the slums of Glasgow. In 2000 he controversially resigned as Bishop of Edinburgh, having lost heart with the the Church over its condemnation of homosexuality. In his years as a priest Richard touched many lives, but behind his confident public face lay a mind troubled by questions. Why is the Church, which claims to be the instrument of God’s love, so prone to cruelty and condemnation? And how can a person live with the tension between public faith and private doubt? With this long-awaited memoir, Richard gives us a wise, poetic and fiercely honest book that recounts a fascinating life - and attempts to answer those questions.

When I was given this book to read I’d not heard of Richard Holloway in a meaningful way. I’d seen his books around the store, particularly Between the Monster and the Saint: Reflections on the Human Condition, and thought their titles were intriguing. Leaving Alexandria is not a work specifically about an aspect of religion, humanity or what is an important topic for him – sexuality. It is simply about him and how he came to think as he does, act as he does and continue along his path as a self-confessed ‘after-religionist’.

I say ‘simply about him’ but as soon as you start reading this book, you realise nothing was ever simple for him. He grew up impoverished in Scotland, and it is a credit to his schooling and personal questing throughout his life that on page after page he quotes from every source of literature you could think of. A lot of the time it feels as if he is quoting off the top of his head and doesn’t need to reference them while writing. However there are detailed notes at the back should you wish to read the complete poem or finish the chapter he quotes.

The book follows a meandering path, chronologically through his life. He frequently gets sidetracked, often in philosophical debates with himself. They’re interesting, thoughtful and often imbued with a touch of humour. The honesty about his actions and thoughts is painful and, as you read, it provokes realisations that perhaps you are also guilty of what he accuses himself of.

Written by a highly intelligent priest, philosopher, human or whatever title you want to give him, I will be seeking out his back catalogue as necessary reading for modern day philosophy.

Kate Rockstrom is a Classical Specialist at Readings Carlton. She regularly performs as a flautist as well as writing about music and books, follow her at www.stonestream.net.