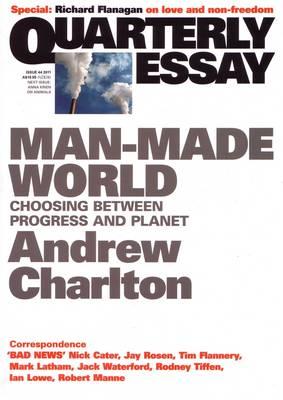 Witnessing at first-hand the failure of the Copenhagen Climate Conference and wondering what went wrong, Andrew Charlton realised the truth of a colleague’s words- ‘The world is split between those who want to save the planet and those who want to save themselves.’ In this groundbreaking essay, Charlton discusses the rift that will shape our future- progress versus planet- rich versus poor. In recent times environmentalists have argued with mounting force that the growth of human activity on our planet is unsustainable. We are, they claim, on a collision course with destiny. But, the developing world counters, environmental threats, dire as they may be, are not the only challenges we face. Indeed, these can seem a distant danger compared to the daily tragedies of life in slums and villages. Across the globe, economists and environmentalists vie over who has the right response to climate change, population growth and food scarcity. In Australia, this battle has plunged our politics into one of its most tumultuous periods. In Man-Made World Charlton evaluates some of the proposed solutions - renewable and nuclear energy, organic and genetically modified food - argues that our descendants will only thank us if we find a way to preserve both the natural world and human progress. ‘Progress has its price. Each step of human advancement has left a foot-print on the planet. Today our two defining challenges are managing climate change and eliminating global poverty. In Copenhagen we learned that these challenges are inseparable.’ Andrew Charlton, Man-Made World. This edition of Quarterly Essay also includes a piece by one of Australia’s leading writers, Richard Flanagan, entitled The Australian Disease; On the Decline of Love and the Rise of Non-freedom.

END_OF_DOCUMENT_TOKEN_TO_BE_REPLACED

Across the globe, economists and environmentalists vie over who has the right response to climate change, population or food security issues. In this groundbreaking essay Charlton argues that our descendants will only thank us if...

Journalist Jo Chandler sets out on a quest that takes her across the Antarctic ice, under the seas and through the tropical rainforests of far north Queensland. Her mission is to explore one of the defining mysteries of our age -...

A Small Book About Drugs

Most people who use illegal drugs haven't had their lives destroyed, aren't living on the streets and enjoy normal and unscathed relationships with families, friends and the world.